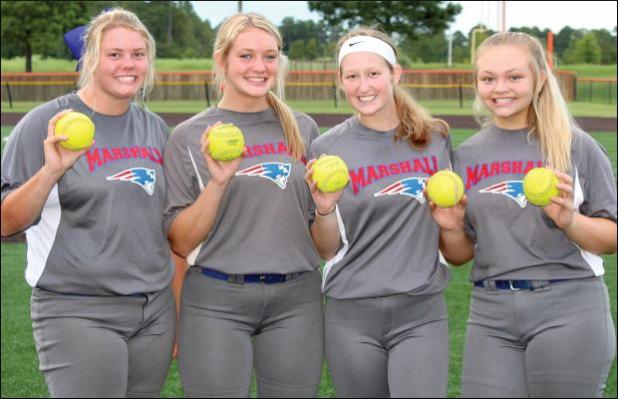 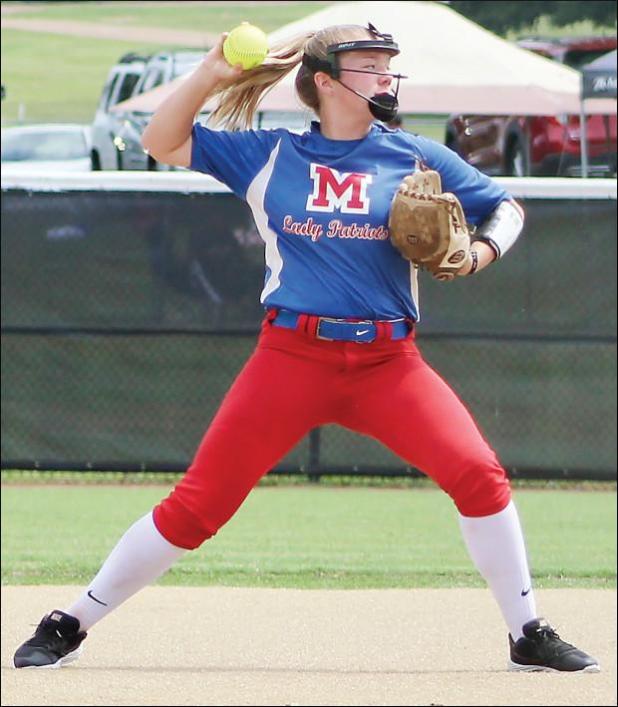 Zoey Rippee makes a play for the Lady Patriots in the win over Winston.

The Lady Patriots visited Starkville Academy Friday and hit five home runs in a 13-0 rout of the Lady Volunteers.

“We definitely came out swinging against Starkville,” head coach Carlton Gibson said. “It was a good way to start the 2020 season.”

The Lady Patriots took control in the top of the first. They surged in front 5-0, thanks to R. Rippee’s two-run homer and then Gurley’s three-run blast.

The home-run show continued in the top of the second. Schultz and Gurley each hit two-run ho mers, while Bain connected for a solo shot.

MA had 13 hits, with Hallie Turner, R. Rippee, Schultz and Gurley getting two each.

While the offense was on fire, pitcher Carlie Vannucci was working her magic from the circle. She threw a no-hitter – striking out five and walking one in four innings of work.

The Lady Patriots then went 1-2 Saturday in the Clinton Christian Tourna ment.

“The pitching we saw improved a lot on Saturday,” Gibson said.

First up was a match-up against defending Class 5A state champion Parklane. Marshall fell 2-0 in a pitcher’s duel.

“We held our own,” Gibson said. “We played really good defense, but we just couldn’t get our timing down from the batter’s box.”

Marshall mustered only three hits – one each from Carlie Vannucci, R. Rippee and Tyler Vannucci.

C. Vannucci took the pitching loss. She gave up six hits, struck out four and walked one.

Parklane’s two runs came in the top of the third.

The Lady Patriots bounced back in their next game for a 6-0 victory over Winston Aca - demy.

Turner pitched the shutout, giving up only two hits, striking out four and walking none.

C. Vannucci led an eight-hit Marshall offensive attack. She connected for three hits and drove in four runs. Adding two hits each were Turner, both doubles, and R. Rippee.

“We hit the ball well against Winston,” Gibson said.

MA scored two in the top of the first, one in the third and three more in the fourth.

The Lady Patriots then wrapped up play on the oneday event with a 4-1 loss to the host team, Clinton Christian, the defending 3A state champion.

“We gave up too many walks and couldn’t string hits together,” Gibson said. “We had opportunities but just couldn’t get it done.”

Clinton Christian scored two in the first and two more in the second. MA got its only run in the top of the fourth on Schultz’s line drive hit.

The Lady Pats produced just four hits in the loss.

C. Vannucci took the loss from the circle. She gave up four hits, walked six and struck out one.

“Overall it was a good weekend,” Gibson said. “We just have to work harder.”

The Lady Patriots (2-2) were scheduled to visit North Delta on Tuesday. They play at home Thursday versus Leake (4 p.m B game and 5:15 A game).

They will play in the Magnolia Heights Tourna ment Friday and Saturday before hosting Pillow Aca demy next Monday, Aug. 10, and going to Lee (Clarksdale) next Tues - day, Aug. 11.