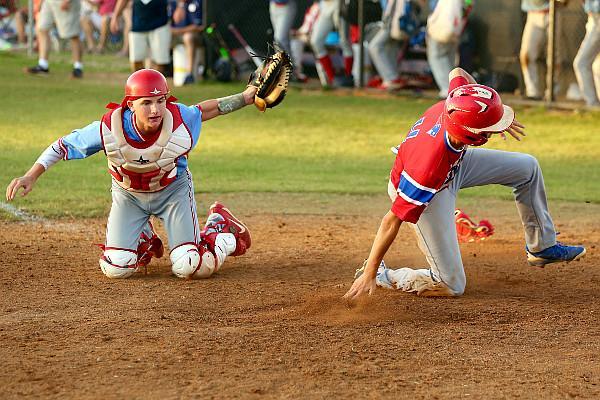 Photo by Theresa Bolden Devore
Marshall Academy’s Tyler Bolden (right) is safe at the plate during a game this summer. 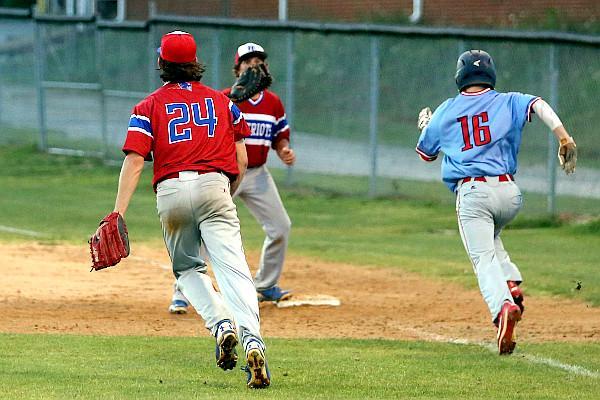 Photo by Theresa Bolden Devore
Pitcher Zane Looney (24) tosses the baseball to first baseman Jordan Bonds for an out in summer action.

Jon Mungle is keeping his Marshall Academy baseball team as busy as possible during the summer.

“We are trying to keep from putting the bats and gloves down just yet,” he said.

He said practices and games during June and July have been going good.

“We’re getting better,” said Mungle, whose Patriots lost in the Class AA state quarter-finals this past season. “Some of our younger guys have to step up and fill some spots.”

This summer he brought in Jordan Rodgers, Univer­sity of Tennessee third baseman and a sixth round draft pick of the Atlanta Braves, to work with the MA infielders.

“We’ve improved defensively,” Mungle said. “We have to find some pitching. We lost some good pitching (off last season’s squad).”

He said the lack of pitching depth could lead to scheduling fewer games in a week next season.

“Four games a week could be tough,” he said. “We may have to pace out our games some.

“In the meantime, we’re going to develop some pitching.”

Mungle said he will be looking for the players who work the hardest to fill the starting lineup in 2018.

“There are a lot of opportunities to play – whoever wants it the most,” he said. “It’s wide open. We will be young, that’s for sure.”

The summer slate included a couple of “very good” competitive baseball teams, he said, plus public schools Myrtle, Alcorn Central and others.

“Offensively, I’m waiting on some guys to do what we’ve been teaching them, but we’re getting there.”

Mungle will enter his third season at the helm of the Marshall Academy baseball program.

The Patriots have won 11 straight district championships but remain in search of their first state championship on the baseball diamond.

Winona, after eliminating the Patriots from the playoffs this past season, went on to win the state crown.