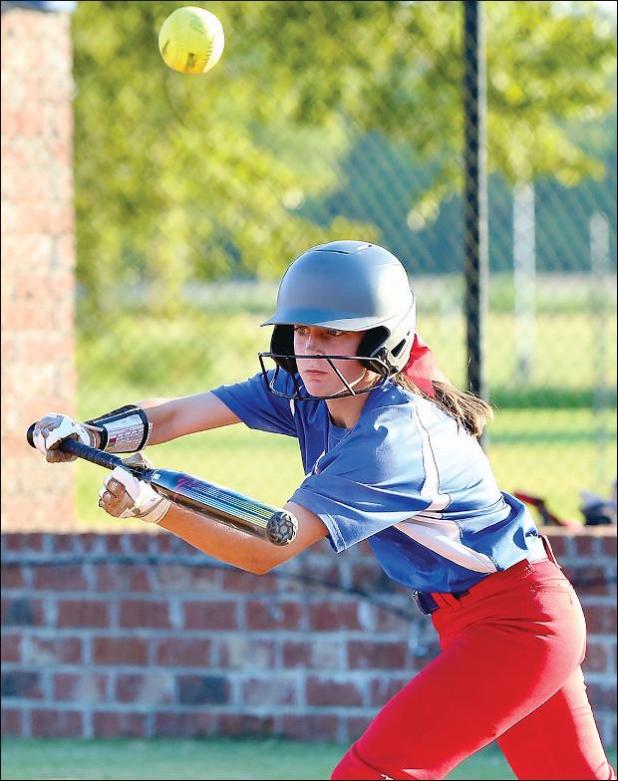 It’s late August, and for the Marshall Academy softball team, that means definitely setting its sights on the goal.

“The playoffs will be here before you know it (in about a month),” coach Carlton Gibson said. “We have to stay focused on the prize at the end.”

Last week, the Lady Patriots improved to 3-0 in District 1-3A by dominating Kirk Academy. They also defeated Oak Hill Academy and lost to Leake Academy as their overall record moved to 15-5.

For the game, Loper had two hits and two runs-batted-in. Turner also had a pair RBIs.

Coach Gibson’s team took control early, scoring six in the bottom of the first and eight in the second to go ahead 14-0.

Extra-base hits were plentiful in those two innings.

In the second, Anna Lauren Bain doubled, and R. Rippee and Christa Schultz both tripled.

C. Vannucci threw 90 pitches and recorded the victory. She gave up eight hits, struck out 11 and walked one. Turner and Cavender pitched in relief.

“In the Kirk and Oak Hill games, the B team players were able to get a lot of experience,” Gibson said.

The Lady Patriots then made the long road trip to Leake Academy in Madden Thursday and lost 5-2.

The contest was called early due to lightning.

“It was a very competitive game,” Gibson said. “Both teams are evenly matched.” MA had beaten Leake 7-6 earlier in the season at home.

After last week’s three-hour ride, the MA girls fell behind 20 in the first, tied the game at 2 in the top of the fifth and then gave up three runs in the bottom of the fifth.

C. Vannucci doubled in the fifth and then the next batter, R. Rippee, drilled a two-run homer over the centerfield fence.

Marshall had six hits, with R. Rippee and Z. Rippee leading the way with two each.

Turner took the loss from the circle. She gave up six hits, struck out three and walked three.

“Our pitchers are working hard and improving,” Gibson said.

“Our schedule is light over the next few weeks so we have time to make adjustments where we need to.”

The Lady Patriots hosted North Delta Tuesday in a district match-up. Next Monday, Aug. 31, they travel to Greenwood to face Pillow Academy. Next Tuesday, Sept. 1, they will face Winston Academy at East Mississippi Community College in Scooba.