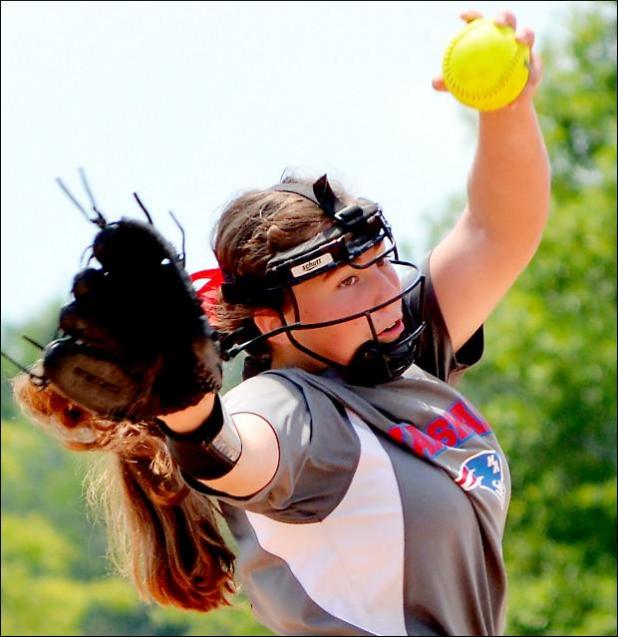 Coach Carlton Gibson’s softball squad evened its early-season record at 4-4. “We have to learn to finish,” he said. “We need to stay focused the entire game.

“We’re still working on discipline at the plate.

The Lady Generals, who had just three hits, scored their only run in the top of the first.

The Lady Patriots had five hits. Getting one each were Rayne Rippee, Kylie Gurley, C. Vannucci, Anna Lauren Bain and Zoey Rippee.

Marshall left six runners on base in the loss.

C. Vannucci threw all four innings. She struck out six and walked one.

The bats got hot as Marshall connected for 14 hits.

MA’s big inning was the fifth when it scored five runs.

Turner earned the victory from the circle. She struck out seven, gave up just two hits and walked only one.

The offense kept clicking in game three of the tourney. The Lady Patriots’ bats produced 15 hits in a dominant 15-0 win over the host school, Indianola Academy.

Bain, R. Rippee, Z. Rippee and C. Vannucci each had a triple.

MA scored nine of its 15 runs in a huge bottom of the third.

C. Vannucci tossed a no-hitter and recorded the win from the circle. She struck out five.

The Lady Patriots turned in another solid performace in game four of the tournament, knocking off Lee Academy (Clarksdale) 6-1.

Several Lady Patriots contributed hits, led by C. Vannucci with two doubles and an RBI. Getting one hit and one RBI each were Gurley, Turner, T. Vannucci and Bell. Turner’s hit was a triple. Also adding a hit each in the five-run win were Z. Rippee and Neal.

Marshall scored one run in the second, three in the third and two in the fourth.

Turner was the winning pitcher. She struck out 10 and walked only one.

MA then closed the tourney with a 4-2 loss to Briarfield (La.) Academy.

The Lady Patriots had more hits, six to four, but couldn’t get the runners home. They left seven stranded.

Z. Rippee connected for two hits and an RBI and R. Rippee had a pair of hits. T. Vannucci and Bain each had a hit.

C. Vannucci pitched all four innings. She struck out six and did not walk a batter.

The Lady Patriots hosted North Delta on Tuesday of this week. They will host a tournament this Saturday.

On Thursday, Aug. 15, they travel to Magnolia Heights.