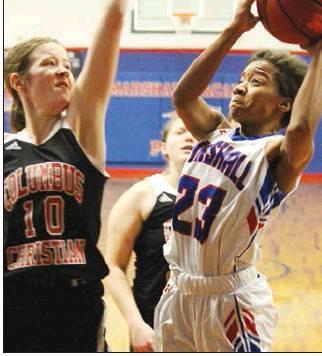 Photo by Penny Lomenick
Kaylan Parks scores two of her 22 versus the Lady Rams.

Marshall Academy wrapped up the pre-Christmas portion of its home schedule with a sweep of Columbus Christian.

The Lady Patriots avenged a 22-point loss to the Lady Rams earlier in the season as they turned up the defensive heat for a 48-38 win this time around.

“I was thrilled with my girls’ effort,” coach Jeremy Ervin said. “That’s the best defensive game we’ve played thus far. We had to defend as a team given their size and our lack thereof. We were able to double team their center with various girls and get on the help-side line to take away their pick and roll.”

MA fell behind 5-0 in the first four minutes.

The Lady Patriots then took their first lead, 7-5, with 35 seconds to go in the opening quarter and never trailed again. It was 10-5 at the end of the first eight minutes.

The lead reached double digits midway through the second when Erin Lomenick drilled a three from the corner. It increased to as many as 12 on a drive to the bucket by Kaylan Parks.

The Lady Pats’ biggest lead of the third was 33-20 when Parks scored, was fouled and hit the free throw.

But MA got some key defensive stops down the stretch and a big bucket from Hallie Turner to win by 10.

K. Parks finished with a game-high 22 points and Lomenick had 12.

“It was also the best we’ve executed the offensive game plan all year,” Ervin said. “They have a tough press, as well as a 1-3-1 trap and a match-up zone, all of which are hard to play against. We were in the right spots and made the right decisions all night.”

The MA boys came out of the starting gate a bit slow but then had no trouble with the Rams, winning 59-24.

The Patriots found themselves trailing 9-6 in the first, but Jeremiah Jones’ three tied it. Marshall then outscored the visitors 11-0 the rest of the quarter to go up 20-9.

It was 28-9 before Columbus Christian picked up another point.

Phillip Parks cashed in three straight drives to the goal late in the first half. The lead was 40-15 at the break.

The Rams were held scoreless in the third. The lead increased to 53-15, and MA went on to win by 35.

P. Parks and J. Jones led the offense with 13 points each.

The Lady Patriots, battling through foul trouble with K. Parks and Lomenick, fought back from a 15-7 first-quarter deficit to lead 24-22 at halftime. Peyton Stephenson hit a pair of big threes in the second period.

Marshall’s last lead was at 28-26 in the third on a bucket and free throw from Parks.

Oak Hill led 43-34 at the end of the third. Lomenick fouled out early in the fourth and the Lady Raiders led by as many as 15 before winning by 13.

The Lady Pats struggled from the free-throw stripe, going 10 of 23.

The Marshall versus Oak Hill boys game was back-andforth most of the night with the Patriots coming up on the short end of a 46-38 score.

The Patriots trailed 8-6 after one quarter and then toook a three-point lead twice in the third, once on a J. Jones three and again on his lay-up, with P. Parks getting the assist. They led 21-20 at halftime.

The teams swapped leads a few times in the third with Oak Hill up 28-26 entering the fourth.

The Raiders, with a loud home crowd supporting them, snatched the momentum down the stretch. They went up by as many as 12 before winning by eight.

Scoring in double digits for MA were P. Parks with 14 and J. Jones with 10.

The Lady Patriots (3-6) and the Patriots (6-2) will play Fayette Academy (Tenn.) Friday afternoon at the FedEx Forum in Memphis,Tenn. They will then participate in the Magnolia Heights Christmas Tournament December 27-29.