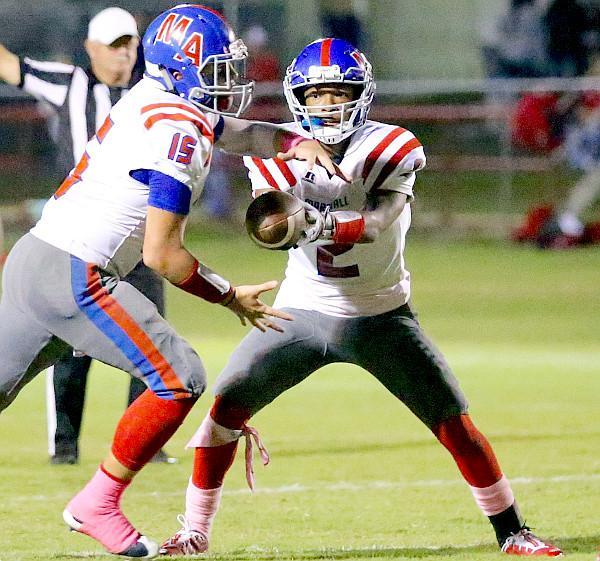 Photo by Theresa Bolden Devore
Jeremiah Jones (2) hands off to Wyle McMillen in the game last week versus the Raiders. 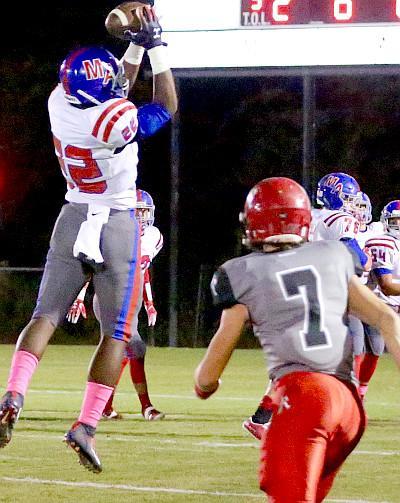 The Patriots had 12 penalties and four turnovers in a 24-18 loss at Oak Hill.

However, the Patriots still have life. They will enter the Mis­sissippi Association of Inde­pen­dent Schools Class AA playoffs as the 13th seed in the 16-team field and travel to fourth-seeded Brookhaven this Friday night.

“It will be a heck of a ball game if we play with the urgency that we have the ability to play with,” he said.

Oak Hill took a 3-0 lead in the District 1-AA match-up last week. Grayson Easterling hit a 50-yard field goal for the Raiders with 9:13 to go in the first period.

MA moved the ball on its opening possession but was flagged three times along the way and ended up having to punt the ball away.

Starting the second quarter, Easterling pinned the Marshall offense at its own 6 with a 50-yard punt.

“I thought the difference in the game was their special teams play,” Donahoe said. “Their kicker (who also punts) is a weapon.

“We had to consistently start at the 20 or inside it, and that makes it more difficult. You have to be solid and not make mistakes.”

The Patriots went backwards on the possession, to the 3, and had to punt out of the back of the end zone.

An interference flag on MA moved the ball to the 11. Will Hanggi had a 9-yard tackle for loss but Oak Hill scored on a pass play from the 20. Easterling added the kick for a 10-0 lead.

The Patriots answered with an 80-yard, eight-play drive. Jeremiah Jones threw to Sam Greer for a first down and then ran for another. Wyle McMillen scored on a 15-yard carry. The extra-point try failed. MA was down 10-6 with 1:32 to go in the second quarter.

Hanggi ended the first half with consecutive tackles for loss – one for 5 yards and another for 10.

The Patriots fumbled the ball away on their first possession of the second half.

The Marshall offense went three and out, and then Oak Hill used another big pass play to reach the Patriots’ 1. The Raiders scored from there on a quarterback keeper. Easterling drilled the kick for a 24-6 advantage.

MA got a 24-yard pass from J. Jones to Reagan White and reached as far as the Oak Hill 22 before an interception ended the drive.

Early in the fourth, Hanggi’s hit caused a fumble which teammate Zach Sorrell picked up and returned 37 yards to the Oak Hill 23.

Three plays later McMillen scored on a 5-yard run up the middle. A try-for-two was unsuccessful. The Patriots were down 24-12 with 9:25 left in the game.

MA went to the onside kick, by Jason McDoniel, and it was recovered by Elijah McCarter. But the MA offense could not capitalize.

The Patriots did cash in their next possession. With 5:34 to go, J. Jones scrambled and found his brother, Everette Jones, who caught the ball along the sideline and completed the 52-yard touchdown play. The point-after try failed. Marshall trailed by six points.

MA got the ball back again with 3:22 left but Oak Hill intercepted a pass on a fourth-and-12 play.

The Raiders were able to run out the clock on their next possession.

The Patriots (3-7) make the four-hour trip to Brookhaven (7-3) this Friday for round one of the post-season. The two teams have had one common opponent this season – the Cougars beat North Delta 21-13 in week two of the season while the Patriots lost to the Green Wave 40-20 in week nine.

“Brookhaven is solid,” Donahoe said. “They execute well with a lot of speed at the skill positions.

“It’s all about whether or not our guys go down there and play with energy and play to the best of their abilities.”