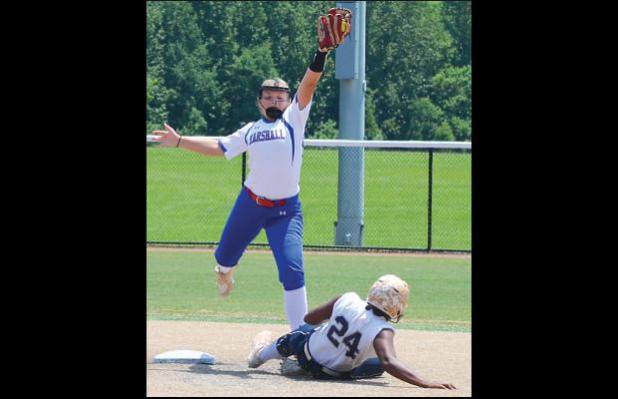 Photo by Sheri Vannucci
Kylie Gurley of Marshall Academy reaches for the softball as a baserunner starts her slide.

The Marshall Academy softball team started the new season with a big challenge, facing three of the top teams in the state.

“That’s how you get better,” head coach Carlton Gibson said.

The Lady Patriots went 1-2 in a tournament last weekend at Hinds Community College with the losses coming against a pair of defending state champions.

MA couldn’t produce a hit it its opener and lost 6-0 to Clinton Christian, the defending Class AA champ.

“We walked eight batters,” Gibson said. “You cannot give a good team base runners.

“Also we were not disciplined at the plate.

Clinton Christian scored one run in the first, two in the third and three in the fourth.

Hallie Turner took the loss from the circle. She gave up just three hits, struck out two and walked eight. She gave up only one earned run.

The Lady Patriots bounced back and defeated East Rankin 4-0 in the next match-up.

Marshall Academy produced four hits – two from Rayne Rippee and one each from Tyler Vannucci and Carlie Vannucci. T. Vannucci had a pair of runs-batted-in, while C. Vannucci also drove in a run.

C. Vannucci also picked up the victory from the circle. In five innings of work, she struck out 10, gave up two hits and walked only one.

Marshall scored all four of its runs in the top of the fifth.

“We played much better,” Gibson said. “Carlie was very effective from the circle. It took us a while, but we finally got the timely hits to produce runs.”

The Lady Patriots then concluded the one-day event with a 10-3 loss to Parklane, the defending Class 4A champion.

Marshall fell behind 3-0 after two innings but rallied to tie the game at 3 in the bottom of the third. Turner had Marshall’s only hit of the game, a single which scored two of the runs. Kylie Gurley also had an RBI.

Parklane answered with seven runs in the top of the fourth to pull away for the victory.

“We held our own and even tied them at 3-3. Then the next inning the wheels fell off. We walked the first two and then gave up a couple of hits and committed a couple of errors.”

C. Vannucci took the loss for MA. She struck out six, gave up eight hits and walked two. Turner threw in relief.

The Lady Patriots will play in the Indianola Tournament this Saturday, Aug.

Marshall Academy will host a tournament on August 10.