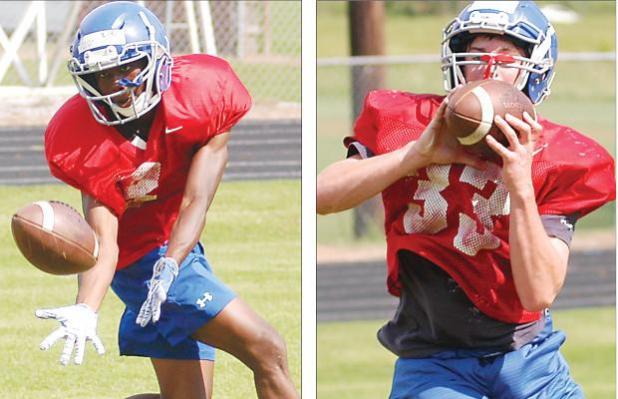 The Marshall Academy football team went through five days of spring drills, and it was productive.

“I felt good about it,” head coach Barrett Donahoe said. “We saw what we needed to see, and we know what we need to work on to get ready for fall camp.”

He had about 20 varsity players participating.

“We are looking at our offensive and defensive concepts, focusing on our depth charts, particularly who can play multiple positions,” Donahoe said.

He said the summer will be crucial for his Patriots leading into the 2019 campaign. That will include the weight room and other individual work, plus seven-on-seven competition.

“We have guys without a lot of experience, so we really need to put in the work this summer, before the first practice date,” Donahoe said. “The summer is so crucial.”

The Patriots were slated to travel to Lafayette for seven-onseven competition on Wednesday of this week.

“Going against the large public school, really good competition, is a good measuring stick for us,” he said.

When fall camp opens on July 29, there will only be a few weeks until time to line up against another team and compete.

MA went 3-8 last season. It included a loss in the first round of the state playoffs.

“There were a lot of factors as far as the reason why we didn’t win as many games as we wanted last year,” he said.

“We have to right the ship and get the program back where it should be.”

In the Mississippi Association of Independent Schools’ realignment for the next school years, Marshall football will be a member of Class 3A, District 1. Other district members are Oak Hill Academy, Tunica Academy and Rossville Academy (Tenn.)

The football district is 100 percent different than the district for other sports.

“It’s a football-only conference and it’s a good mix – Oak Hill, Tunica and Rossville – and I think we can compete,” Donahoe said.

The Patriots start the 2019 season on August 23 at home versus North Delta.

Next up will be a couple of new opponents, Macon Road Baptist (Tenn.), away, and public school Myrtle at home.

MA goes to Grenada to face Kirk Academy on September

“North Delta, Kirk, Lee and Magnolia Heights are regularly on our schedule and big challenges for us.

“Winona was a district opponent for us the last two years, and we’ve developed a good relationship with the coaching staff there. They finished second in our district last year. Playing them, we will see where we are as a team.

“Macon Road is new to the MAIS. And Myrtle is a firsttime opponent and will be a good game for us and a big challenge as far as independent school versus public school.”