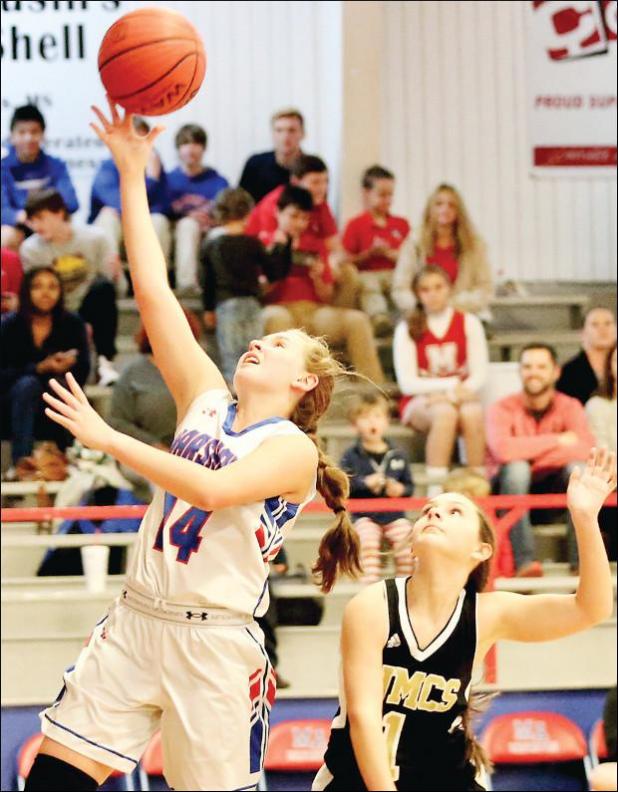 Leading the offense were Kylie Gurley with 10, seven of those in the first half, and Karah Nicholson and Hallie Turner with nine each.

MA led by nine after the opening quarter but stretched the advantage to 29-12 at the halfway mark. The Lady Pats then outscored the Lady Knights 14-6 in the third and 10-5 in the fourth.

It was simply no contest in the nightcap for the Marshall Academy boys. They rolled to a 58-7 win over West Memphis.

The Patriots exploded out of the starting gate, leading 26-1 after one quarter. It was 49-3 at halftime.

Eleven MA players scored in the 51-point win. Rod Moore led the way with 11, eight of those coming in the second quarter.

The clock ran non-stop the second half, and the fourth period was sliced to just six minutes instead of eight.

Marshall squads made the road trip across the Mississippi River bridge in Memphis, Tenn., to Arkansas Thursday night and again swept the Black Knights.

The Lady Patriots clung to just a one-point lead at the half, outscored West Memphis 23-0 in the third quarter and went on to win 52-24.

Gurley lit the fire for MA. She scored 15 of her gamehigh 21 points in the third.

In the nightcap, Jimmy Morales cashed in 22 points as Marshall boys rolled to a 61-28 win over the Black Knights.

Moore had 11 and Jordan Bonds nine.

The Lady Patriots (3-4) and Patriots (3-1) hosted Bayou Academy on Friday night of last week. They then played Greenville Christian at Mississippi Valley State University on Monday of this week.

Next Monday, Dec. 2, they host Tunica Academy, and next Tuesday, Dec. 3, they travel to Columbus Christian.