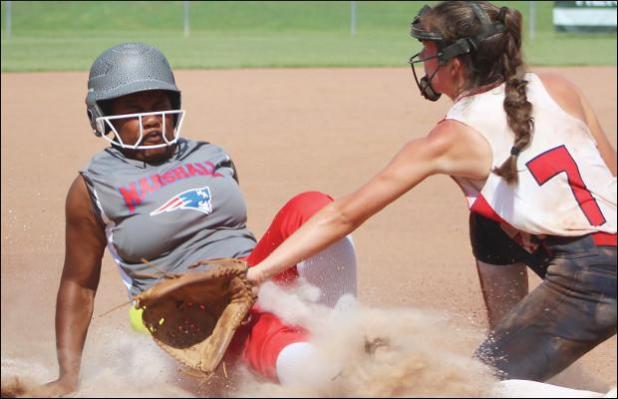 Photo by Angie Bain
Evelyn Greer of Marshall slides home safely during a game in the Tri-County Tournament.

The Lady Patriots opened the week with 10-5 District 1-3A victory at home over Lee Academy.

They struggled a bit out of the starting gate, falling behind 3-0 in the top of the first, but rallied big-time with two runs in the bottom of the first, seven in the second and one in the fourth.

Carlie Vannucci and Anna Lauren Bain each had a pair of hits. Getting one hit each were Rayne Rippee, Zoey Rippee, Abby Bell and Faith Shankle.

C. Vannucci pitched all seven innings and got the win for Marshall. She gave up nine hits, struck out six and walked two.

“We struggled in this game but still found ways to produce,” head coach Carlton Gibson said.

The Lady Patriots traveled to Senatobia Thursday and Hallie Turner’s one-hitter from the circle led them to a 4-0 win over rival Magnolia Heights.

She struck out four, walked three and got some solid defense behind her from her teammates.

“Hallie pitched the best game of her young career,” Gibson said. “She was very dominant.

“This was the most complete game we’ve played, from start to finish.”

The MA bats stayed hot. Getting two hits each in the Lady Pats’ 10-hit attack were R. Rippee, Bain and Bell. R. Rippee also had a pair of RBIs.

Adding a hit each were C. Vannucci, Gurley, Tyler Vannucci and Zoey Rippee.

Marshall scored three runs in the second and one in the seventh.

The Lady Patriots then went 2-1 on Saturday in the Tri-County Tournament.

In their first game, they knocked off Leake Academy 6-2.

The weather was hot and once again so were the Lady Pats’ bats as they connected for nine hits.

Bain had a hit and a pair of RBIs. Also contributing one hit each were R. Rippee, Gurley, Bell and Shankle.

C. Vannucci threw a onehitter versus the Lady Rebels. She struck out two and walked two in four innings of work.

Next up the Marshall girls outhit Jackson Prep nine to one, got a one-hitter from Turner and celebrated a 4-0 win over the big school from the state’s capital city.

Leading MA’s nine-hit outburst were C. Vannucci with two hits and two RBIs, plus Turner, T. Vannucci and Shankle each with two hits. Adding one hit each in the big victory were R. Rippee and Gurley.

From the circle, Turner also struck out three and walked two.

The Lady Patriots then closed the tournament at Tri-County with a 2-1 loss to Briarfield Academy (La.).

They fell behind 2-0 in the top of the third and tried to rally in the bottom of the fourth but could only push one runner across.

MA managed just two hits – one each from Turner and Bain.

Turner and C. Vannucci each pitched two innings. They combined to give up just three hits, strike out nine and walk one.

The Lady Pats committed four errors and left four runners on base.

“Our pitching and hitting are very good but both have to be more consistent,” Gibson said. “At times our defense shows signs of greatness. We have to quit making mental mistakes.”

The Lady Patriots (10-6-1) will play in the Bayou Academy Tournament this Saturday at Cleveland. Next Tuesday, Aug. 27, they go to North Delta.