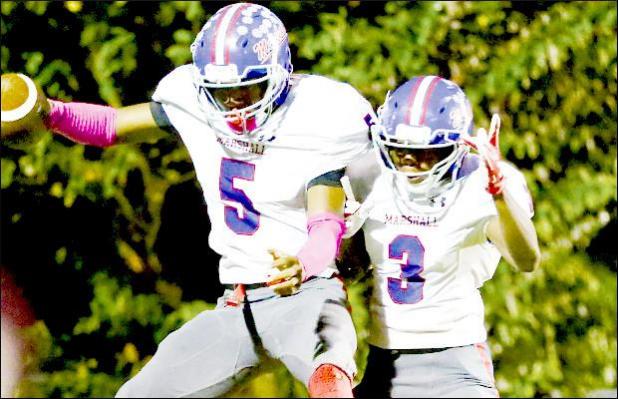 Marshall Academy stepped up two classifications Thursday night and came oh, so close to pulling off the shocker.

The Class 3A Patriots let a fourth-quarter lead slip away and lost a hard-fought, high-intensity game, 42-34, to Class 5A rival Magnolia Heights on the Chiefs’ home field.

“I’m so proud of our effort,” head coach Barrett Donahoe said. “We fought extremely hard and had a chance to win.

“The frustrating thing – we put ourselves in a position to win and just didn’t execute at crucial times, offensively and defensively. Playing competition at that level, you have to make plays on offense to extend drives or to get off the field on defense.”

Momentum swung the Patriots’ way early when they stopped the Chiefs on a fourthand-1 play.

MA took over at its own 35-yard line and scored on its third play from scrimmage. Philip Parks, who had his third straight game of rushing for more than 230 yards, dashed 49 yards for the touchdown. Landon Houston added the two-point conversion.

Magnolia Heights tied the game at 8 with 1:49 left in the first. Kyle Brewer ran 34 yards for six, and Bo Young threw to Grant Boggan for two.

The Pats answered quickly. On first down, Jeremiah Jones passed to Sam Greer, who made a move past a defender and raced 64 yards along the sideline for a touchdown. A try-for-two failed.

The home team added another touchdown with 1:30 to go in the first half. Garrin Windham carried for the 8-yard score. The kick put Magnolia Heights up 22-14.

Then Marshall struck on another first-down play. Parks got loose for 76 yards and a score. Jones tossed to Rusty Bolden for the conversion to knot the game at 22.

Greer picked off a pass in the end zone to end the first half.

The Patriots traveled 49 yards on the opening possession of the second half to take the lead. A fake punt gained 15 yards and a first down as Houston threw to Bolden, who made a leaping catch. On the next play, Parks burst up the middle for 29 yards and the touchdown. A try-for-two was not successful.

The Chiefs responded. Windham ran 33 yards for a touchdown. The extra-point kick was no good, and the game was again deadlocked, this time at 28.

A couple of minutes later Parks scored his fourth touchdown of the night, this one covering 32 yards as he tight-roped the sideline. The two-point try failed.

After reaching the MA 13 on their next possession, the Chiefs went backwards. Both Houston and Rod’drickas Moore had tackles for loss for Marshall.

The game moved to the fourth with the Pats still leading 34-28.

MA had to punt the ball away on its next two possessions.

“We just never could make it a two-score lead,” Donahoe said.

Magnolia Heights went on top with 2:50 left. Windham reached the end zone from 9 yards out, and Brewer carried for the conversion. It was 36-34.

Young then picked off an MA pass, and the Chiefs cashed in the turnover when Brewer scored on a 2-yard carry. The try-for-two was stopped short, leaving the advantage at eight, 42-34 with 1:18 to go.

Houston got a big kickoff return for the Patriots, 37 yards to the Magnolia Heights 40. On the last play of the game, from the 26, a pass to the end zone fell incomplete.

Leading the defensive effort were Colton Neal with 10 tackles, Keaton Morgan and Moore with seven each, Jack Smith with six and a half and Houston with six.

“Hopefully, we can grow from this loss,” Donahoe said.

“After seven games, we’ve proven we are a lot better football team than when we were at Grenada (a loss to Kirk Academy on September 13). I can see huge things ahead for this team, but we have to continue to work. We have a lot of things we need to fix. We have to be more disciplined on both sides of the ball.”

Next up for the Pats (4-3) is a home game this Friday night versus Winona Christian (7-1). The Stars suffered their first loss of the season last week, 27-26 to Kirk.

“This game will be our measuring stick,” Donahoe said, “and it’s Senior Night. It’s a really big game for us.”