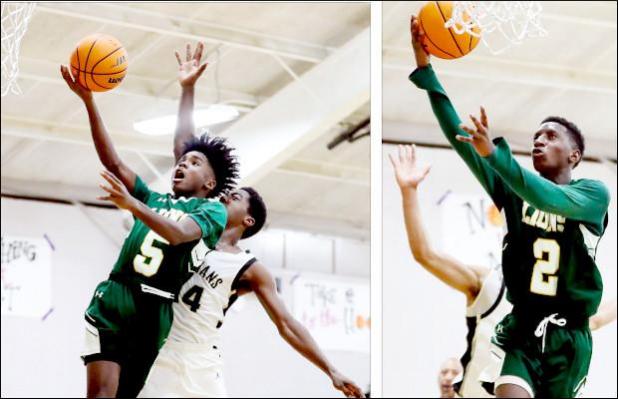 “It was a good test for us,” said coach James Sales, who is pointing his team for what he hopes will be a long run in the post-season. “They were bigger than us, but we matched up with them and played good basketball.”

That win followed a 67-34 blowout of Independence on day one of the event.

“We’re playing pretty well right now,” he said. “I’m mixing up the lineup some, trying different guys at different positions. We just have to build that team chemistry.” Cedric Watson poured in 23 points

in the 26-point win over the Trojans from the neighboring state.

Others scoring in double figures were Devin Moore with 18, Michael James with 15 and Jabari Wright with 11.

The Lions led by just six, 29-23, at halftime. They increased the advantage in the third and then really poured it on in the fourth, outscoring Dyersburg 2510 in the final eight minutes.

Byers also enjoyed balanced scoring in the 33-point win over the Wildcats.

Five Lions scored in double digits — James with 16, Watson with 12, Jaylen Glover with 11 and Vincent Talley and Moore with 10 each.

“That’s what I really want — lots of guys contributing,” Sales said. “That’s what I tell them over and over, `Do your part. You don’t have to carry all the load.’ And they’re buying into that.”

Byers and Independence were tied at 14 after one quarter. In the second, the Lions roared to a 32-15 advantage. In the third, they outscored the Wildcats 24-8.

Coach Sales said his young team, which features just one senior, must continue to grow up.

“We just have to stay in the gym as much as possible, stay healthy and be consistent,” he said. With the wins last week, the Lions improved to 7-1 overall. They’re 3-0 in District 3-1A.

Lake Cormorant, a 6A school, comes around on February 2, just before the district tournament cranks up.

“We will see then how much we’ve improved,” Sales said.

Come tourney time, the goal is simply to play well and advance.

“Maybe we will be grown up and playing even better then,” Sales said.

“It’s been a different season (with COVID-19), and things could be a lot different come post-season time.

“I think we have a chance to go a long way, if we get that team chemistry. I know we’re motivated.” Coach Sales said the Lions will not play this week or next due to COVID-19 guidelines. District 3-1A games will be rescheduled. According to the regular schedule, they are slated to host West Union Tuesday, Jan. 19.