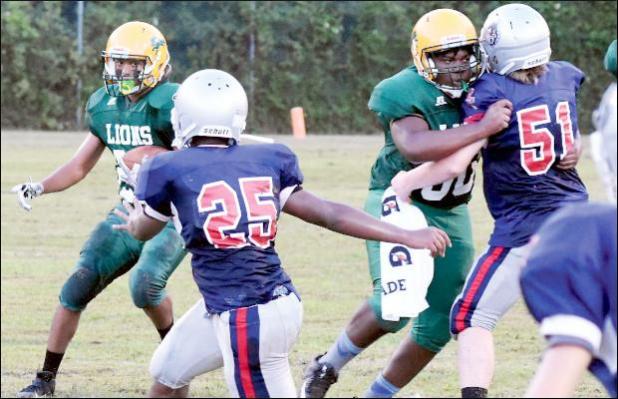 It wasn’t pretty in some ways, but it looked just fine on the scoreboard for H.W. Byers.

“We had some first game sloppiness — way too many penalties,” coach Chris Daniels said. “We have such a young team, only two seniors. But you’re going to have some of those type mistakes in the first game, even with a roster full of seniors.”

The flags started on the first play of the game when a Byers touchdown was nullified by a block in the back.

“We can’t have that,” Daniels said. Later in the first, Byers recovered a Wolves’ fumble at the Rossville 45. Malik Glover ran for 17 yards on first down, and later scored on a 23-yard carry around the left side. A try-for-two failed.

The two teams swapped fumbles to close the first quarter.

The Lions put together a 64-yard, seven-play scoring drive in the second. Glover had three big plays, the first when he gained 18 yards after a catch near the line of scrimmage and the second a 29-yard burst from the backfield. Meanwhile, Byers had to overcome a couple of penalties and recovered two of their own fumbles. On a third-and-long play, Michael James threw over the middle to Glover for a 38-yard touchdown. James kept for the twopoint conversion. It was 14-0.

Byers recovered another Wolves’ fumble at the Rossville 48-yard line with 53 seconds left in the second.

The Lions again overcame a couple of penalties to tack on more points before intermission. On the last play of the first half, James threw a swing pass to Shawn Sellers, who reeled in the football, dodged a couple of would-be tacklers and reached the end zone from 30 yards out. The two-point try was not successful. It was 20-0 at the break.

The Wolves’ only scoring drive came to start the second half. It started at their own 42. The touchdown came on a 37- yard pass play. The extra-point try was no good.

Glover ignited the Lions once again on their first possession of the third. He started with a 26-yard sprint to midfield and followed that with a 15-yard run to the Rossville 35.

Chris Isom Jr. wrapped up the drive with a 3-yard carry to the end zone, and James kept for the conversion. With 2:13 to go in the third, the home team led 28-6.

The Wolves got another touchdown midway through the fourth on a quarterback keeper and also added the two-point conversion.

Byers took over and ran about five minutes off the clock to end the game.

“We played well in spurts, and there were spurts where we didn’t play well,” Daniels said. “A win is a win. The muddy field didn’t help at all.”

Glover carried nine times for 151 yards and a touchdown. He caught four passes for 87 yards and a score. James was six of 10 passing for 134 yards and two TDs. The Lions had 537 yards total offense, 403 on the ground. They had three turnovers and 10 penalties.

The Lions go to Potts Camp Friday for a match-up against the cross-county rival, Class 2A Cardinals, who downed Falkner 34-6 in week one.