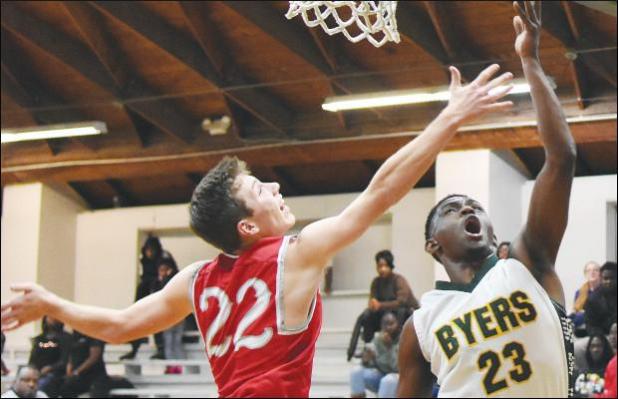 Photo by Barry Burleson
KaDerious Rhyan (23) of the Lions scores on a lay-up versus district opponent West Union last week.

The H.W. Byers Lions find themselves right where they want to be come post-season tournament time.

Coach James Sales’ squad, with wins over Ashland and West Union last week, finished 10-0 in Region 3-1A. The Lions will be the number one seed in next week’s district tournament at Ashland.

“That’s the first thing we wanted to accomplish,” coach James Sales said. “We can check that off, and now it’s time to continue this success the rest of the way.

“It’s been a long time since the Byers boys finished in this position. We’re excited, and we’re enjoying it. But we know we have to keep working.”

After a big win over non-district foe Independence last Friday, the Lions had won 15 straight games after starting the season 1-8.

Leading the offensive attack were Michael James with 17 points, Cedric Watson with 15 and Devin Moore with 10.

Watson was seven of 10 from the free-throw stripe and hit a pair of threes.

James scored eight of his 17 in the opening quarter.

Byers led 25-14 at the half and then tucked the win away by outscoring Ashland 24-8 in the third.

Kenneth Morgan scored 19 for the Lions.

The Byers girls were on the short end of a 61-50 score versus the Lady Blue Devils.

The Lady Lions struggled out of the starting gate, scoring only six points in the opening quarter. They were down 35-22 at halftime and 52-35 at the end of three quarters.

Jakorien Hubbard scored almost half of Byers’ points. She finished with 22. Adding nine each were Anteyonna Williams and Keyonna Washington.

For Ashland, Cherica Cheairs and Sylena Smith combined for 45 – Cheairs with 24 and Smith with 21. Jenivia Williams added 11.

To say the Lions turned it up a notch in the third quarter Thursday at home in a 71-45 win over West Union would be a big understatement.

Byers led 33-24 at the half but the Eagles sliced the deficit to one. Coach Sales called a timeout.

“I just told them to settle down and let their defense dictate the offense, and that’s what happened,” he said. “We got the wheels turning.”

The Lions nailed four threes in the third, two by Julian Moore, one by Watson and another by James.

The home team enjoyed balanced scoring – Kaderious Rhyan with 16, D. Moore with 15 and Watson and James with 12 each. D. Moore was seven of nine from the free-throw line.

The Lady Lions put up a strong fight versus West Union before falling 46-36.

Hubbard was the top gun in the loss. She scored 20.

It was far from easy but the Byers boys avenged a couple of early-season losses by defeating Independence 66-61 Fri day night at home.

“It was a real tough game,” said Sales, whose team improved to 16-8 on the season. “We got pushed and had to fight to come back. We need that type of game.”

They then grabbed the home-court momentum in the fourth, outscoring the Wildcats 23-16 and rallying for a fivepoint win.

The Byers girls fell behind by double digits in the first and went on to lose to Independence, 50-37.

The Lady Lions (3-7 in the district and 4-19) and Lions wrap up the regular season this week against non-district opponents. They visited Her nando Tuesday, and then go to Water Valley Friday