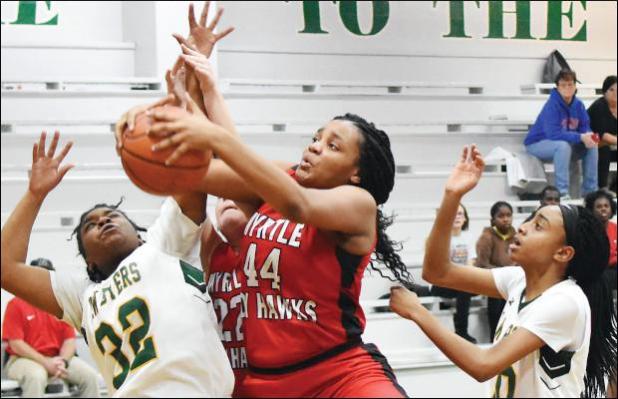 Photo by Barry Burleson
Dallas Fitzpatrick (32) battles a Myrtle player for a rebound. At right is Keyonna Washington.

The H.W. Byers boys are taking a four-game win streak to the Christmas break.

The Lions crushed both Myrtle and Hickory Flat last week to improve to 3-0 in Region 3-1A.

Those wins followed ones over district foe Coldwater and 4A Tishomingo County the previous week.

Against Myrtle at home Tuesday, Dec. 17, Cedric Watson caught fire early and the other Lions jumped on board in an 86-42 victory.

Watson scored 11 points in the first quarter and 19 for the game, including five threes.

H.W. Byers led 25-12 after the first quarter, thanks to a last-second three from Watson.

The Lions were up by as many as 17 in the second and held a 40-25 advantage at intermission.

Julian Moore opened the third with a bucket and the Lions kept on rolling.

Devin Moore dunked to end the third and then opened the fourth with another slam.

Other Lions scoring in double digits were D. Moore and KaDarieus Rhyan with 18 each and Michael James with 10.

Five of eight Lady Lions fouled out Tuesday night, Dec. 17, as they saw a 15-point lead slip away. They lost a heartbreaker to Myrtle 68-65.

The game was tied at 13 at the end of the first quarter.

Jakorien Hubbard carried the load in the second. She scored 14 in that eight minute span as the Byers girls surged in front 36-25 at the half.

The lead reached 15 in the third when Dallas Fitzpatrick nailed a shot from the corner.

Foul trouble started sinking in, and Myrtle got to win 11 at the end of the third.

Yasmine Robinson and Fitzpatrick were the first to leave the game with five fouls. Anteyonna Williams and Jakira Bryson followed, and then Hubbard fouled out near the end of the contest.

The Lady Hawks, with Byers players exiting, chipped away the entire fourth. They took the lead, 57-55, with 3:54 remaining. Hubbard put the Lady Lions back in front, 63-61, with 1:28 left but they couldn’t hang on after she fouled out, too, leaving three on the court for Byers.

“We are getting better,” coach Fred Stafford said. “I’m proud of the effort. We just have to play smarter.”

At Hickory Flat on Thursday, the Byers girls dropped a 52-25 decision to the Lady Rebels.

They kept it close for one quarter but then fell behind 33-9 at halftime.

R’Daztiny Harris, Hickory Flat’s star player, shined brightly on this night. She poured in 32 of her teams’ 52.

The Lions finished the pre-Christmas portion of their schedule at 5-8 and the Lady Lions 1-11. The boys will play in the Peggy Bain Tournament at Alcorn Central on December 27-28.