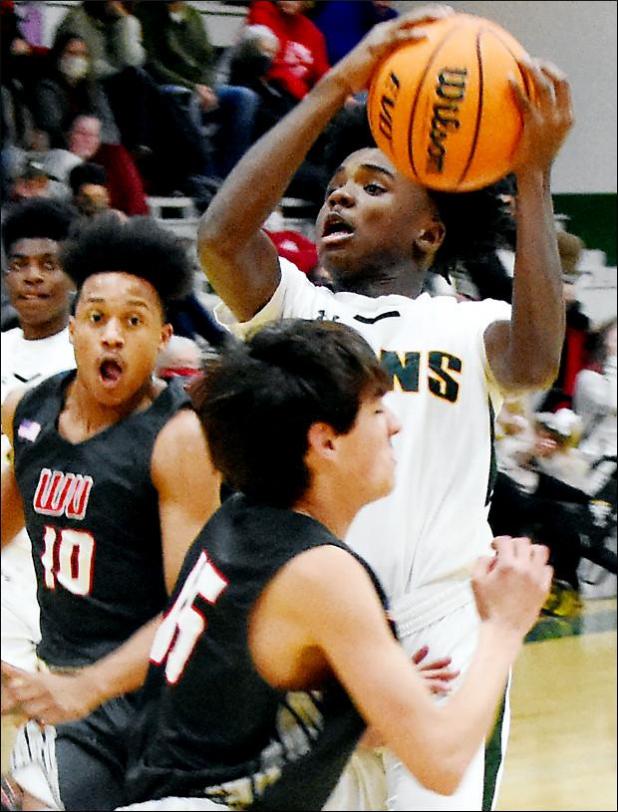 Photo by Barry Burleson
Byers’ Jabari Wright collides with a West Union player on his drive.

H.W. Byers, which dominated its district foes in the regular season, continued that trend in the Region 3-1A Tournament.

The Lions claimed the championship trophy with a 36-point win in the semi-finals and a 25-point victory in the title game.

“I think we’re ahead of where we were last year,” said coach James Sales, whose team lost a heartbreaker in 2020 in round two of the state playoffs. “Teams have played us a lot of different ways defensively, and that has benefited us.

“We’ve seen about everything. I hope it pays off going down the stretch.”

It was a bit of a slow start for Byers on the home floor versus West Union Friday in the district semi-finals but that didn’t last long. Sales’ team coasted to the 61-25 win.

Cedric Watson lit the fire in the second. He hit back-toback threes and then sank a fall-away shot. The lead was suddenly 25-8. It was 29-10 at intermission.

Devin Moore’s bucket made it 37-12 in the first three minutes of the third, and Byers just kept on rolling.

James scorched the nets for 28 points. Watson also had a solid offensive night with 16 points.

A pesky Myrtle team put up a fight in the first half Saturday of the championship contest before the Lions roared to a 66- 41 win.

“The first half was tight,” Sales said. “It’s hard to beat a team three times.”

Byers’ lead at the halfway point was 30-24. “We made some adjustments and came back out and played better,” he said. “Our defensive changes caused them some problems, and we just built the lead from there.” The advantage was 49-32 at the end of the third, and the Lions kept on cruising.

The Lions enter the state playoffs with a 16-1 record, their only loss coming to defending state champion Ingomar.

They will host Tremont Friday at 5 p.m. (weather permitting). If not, it will be Saturday at 3 p.m. With a win, they go against either Okolona or Blue Mountain next Tuesday, Feb. 23. They could possibly meet Ingomar again next week, February 26, in round three.