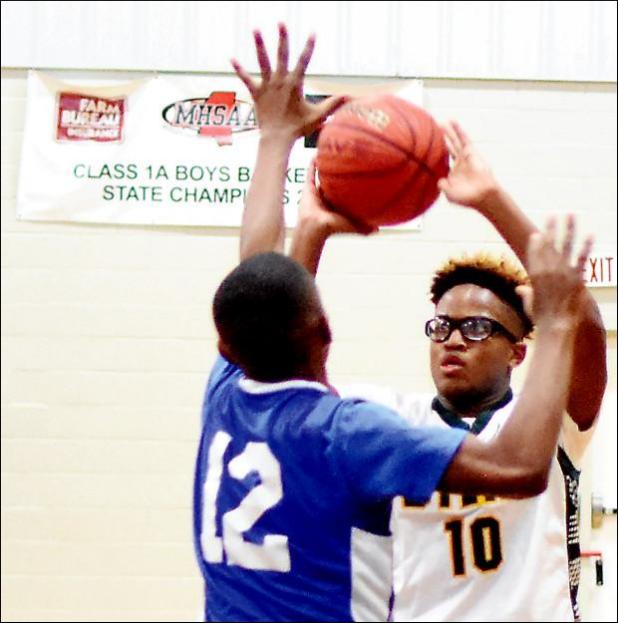 The H.W. Byers Lions brought the intensity their head coach wanted to the district championship game.

The result was a rout – 65- 32 over West Union for the first-place trophy. The Lions claimed both the tournament and regular season crowns.

“We came out and played with real high energy,” coach James Sales said. “We played hard on the defensive end.

“We also followed the game plan and executed. We hustled, got on the floor when we needed to, and did the small things. It paid off.”

KaDerious Rhyan had a monster of a game. He scored 27, with 23 of those coming in the first half when the Lions built a comfortable 40-19 lead.

“He was aggressive and set the tone early,” Sales said. “Everybody followed his lead.”

The Lions, who upped their season mark to 19-9, were slated to host Blue Mountain Tuesday in round one of the 1A playoffs.

“Our goal is to just keep advancing,” Sales said. “I think these guys know now that if we play ball and execute and listen, we can play with anybody.

With a win over Blue Mountain, Byers will meet the Baldwyn- Okolona winner Saturday night at a site to be determined.

The Lions had a tough time with Coldwater in the first 16 minutes on Wednesday of last week but turned it up several notches in the second half. They won 76-47.

Byers clung to a 29-26 halftime advantage.

Then James lit the fire in the third. He hit a three and scored on a couple of drives to the hoop. He lead was 40-28 with 5:06 left in the third.

At the 1:10 mark, Cedric Watson lobbed a pass to Devin Moore, who slammed, and it was 51-30. Watson drilled a three early in the fourth to stretch the advantage to 59-33, and the Lions coasted from there. Watson scorched the nets for 26 points. James was close behind with 24. Moore had 11.