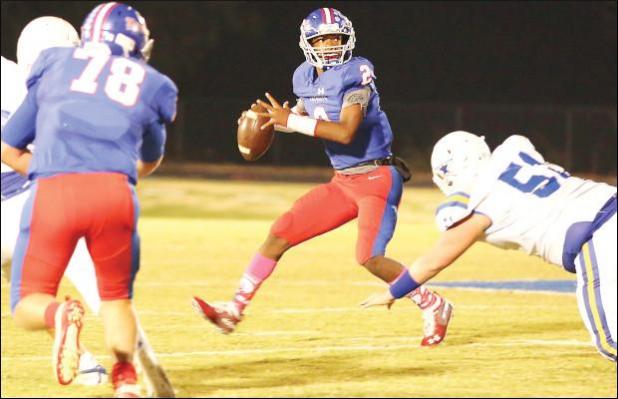 Patriot quarterback Jeremiah Jones (2) scrambles in the pocket Friday versus Winona with protection from Brady Jeanes (78).

In two of three Marshall Academy losses this season, the Patriots relinquished the lead in the fourth quarter, but not this time.

They thwarted Winona Christian’s two-point attempt with 1:24 left Friday night at home and knocked off the Stars 28-26.

“Losing the way we did to Kirk (September 13) and Magnolia Heights (October 10) and then to be able to hold on in this one, that was gratifying,” coach Barrett Donahoe said. “We had to get that stop on the two-point conversion, and we did.”

The Patriots, with the power point system in place as far as playoff seedings, most likely secured a third seed in the 12-team field. They improved to 5-3 overall. Winona fell to 7-2 and will likely be the second seed. Both teams have already won their respective Class 3A divisions.

“We wanted to see how we stack up with the best in our league,” Donahoe said, “and this showed we can play with anybody.”

The Pats got their offense clicking on its second possession of the game last week. They drove 86 yards in 10 plays. The biggest was a 40-yard pass from Jeremiah Jones to Philip Parks that moved the ball to the Winona 33. Facing a fourth and one at the 13, Parks darted to the right corner of the end zone for the score with 37 seconds left in the first quarter. Landon Houston threw to Rusty Bolden for the two.

MA added more points in the first few minutes of the second. Parks found running room up the middle and raced 64 yards for six. The try-for-two failed. It was 14-0.

At the 7:10 mark of the second, the Stars pulled to within 14-6 via a 15-yard touchdown run. A two-point attempt was not successful.

Marshall answered with its second long drive of the night, this one 69 yards in 12 plays. Jones ran for a first, and then the Pats faced a fourth and four at the Winona 45. They faked the punt and Parks picked up 8 and the first. Walker Sanders threw to Colton Neal for an 18-yard touchdown. Parks carried for the conversion. MA’s lead was 22-6 with 1:32 left in the second.

Winona was able to cut into the deficit prior to intermission when they cashed in a 13-yard pass play. The try-for-two failed. It was 22-12 at halftime.

The Stars drove for more points on the opening possession of the second half. The 52-yard drive ended with a 1-yard carry to the end zone. A twopointer pulled the visitors to within 22-20.

Late in the third, with Parks leaving the game due to an injury, Houston moved to the running back position. He had a pair of first-down runs and then Jones carried for the 6-yard touchdown. The two-point try was denied. MA’s lead was 28-20.

“Landon (Houston) really gave us a spark right there,” Donahoe said. “He ran the ball very hard. He doesn’t get a lot of work at that position in practice, but for him to come in and perform the way he did, it speaks highly of him and his character.”

Turnovers followed, for both teams. The Patriots lost a couple of fumbles. And Jimmy Morales picked off a pass for Marshall.

The Stars took over at their own 25. On third down, a 53-yard pass play moved the ball to the MA 15. They scored on a 1-yard run, but the Pats got pressure on the passer on the two-point try and the ball fell incomplete, securing the victory.

“It was frustrating that we were not able to find a way to go up two scores there in the second half, but our guys showed a lot of heart in the game,” Donahoe said. “We have to continue to improve. That has to be our focus.”

Neal led the solid defensive effort with nine and a half tackles and a sack.

Jack Smith followed with six and a half tackles, and Rod’- Drickas Moore had six.

The Patriots close the regular season with a road trip to Clarksdale this Friday night to face Class 4A Lee Academy. The Colts are 5-3, coming off a huge 28-21 win over rival North Delta.

“Lee is a solid football team,” Donahoe said. “They play very well defensively. They’ve done a good job of getting better and better as the season has progressed. It will be a challenge for us.”

The Patriots will get a bye in the first round of the playoffs November 1. They will host a playoff game on November 8.