Photo by Penny Lomenick
Hannah Swallers throws to Carlie Vannucci at first base for an out versus Magnolia Heights. 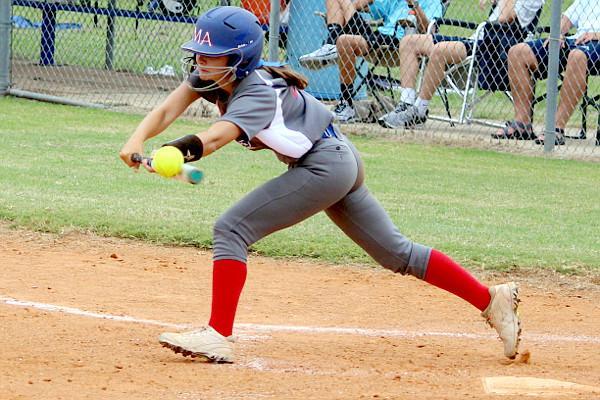 The highlight of a busy week for the Marshall Academy softball team was a thrilling, extra-inning home victory over Magnolia Heights.

The Lady Patriots scored on a bases-loaded walk in the bottom of the eighth inning to win 9-8 Tuesday, Aug. 1.

“This was a great game for both teams,” coach Carlton Gibson said. “Our girls never gave up.”

MA had what looked to be a comfortable 5-1 lead. But the Lady Chiefs rallied with a seven-run top of the seventh to go up 8-5.

The Lady Pats tied it in the bottom of the seventh. Hannah Swallers led off with a double; Hannah Champion walked; Faith Shankle singled for a run-batted-in; Tyler Vannucci grounded out and picked up an RBI; and then Baylee Floyd singled to knot the contest.

In the top of the eighth, Swallers threw three pitches for three outs.

In the bottom of that inning, Jessica Deming doubled to center field. Swallers walked, and Champion got a hit to load the bases. Shankle then earned the game-winning walk.

“We had the lead, then gave it up and then battled back for the win,” Gibson said. “I am very proud of our seniors for stepping up and leading.”

“After Hannah (Swallers) gave up eight hits in the top of the seventh, she collected herself and threw three pitches in the eighth to shut them down.

“Our offense was explosive. If we continue to improve, we will be hard to handle come playoff time.”

The Lady Patriots had 13 hits – three from Alexis McGreger, two each from Deming, Swallers and Erin Lomenick and one apiece from Carlie Vannucci, Shankle, T. Vannucci and Floyd.

The Marshall softball squad had no trouble getting the win Monday of last week at Hebron Christian. The final was 16-0.

The game was scoreless until the third inning when the MA bats awoke. The visitors scored three in the third and 13 in the fifth.

“Everybody on the team got a hit and contributed in some way,” Gibson said.

Swallers pitched the full five innings and had a season-high 12 strikeouts.

The Lady Patriots met up with the Lady Chiefs again on Saturday at North Delta and dropped a 4-1 decision.

“We played really good defense and our pitching was good enough to win, but we did not give our pitcher any run support,” Gibson said.

Marshall managed just five hits in the five-inning contest. C. Vannucci led the team with two hits. Lomenick, Swallers and McGreger had a hit each.

“I like the future of this team with this eighth grader leading the way over the next several years,” Gibson said.

Champion earned the win from the circle as the Lady Pats knocked off the Green Wave 9-4 Saturday.

She gave up four hits in the first inning and then settled down, only allowing one hit over the next three innings.

McGreger and Lomenick led the way at the play with two hits each. Deming, Swallers, Champion and Shankle, who burned the left fielder with a triple, each had one hit.

“North Delta is rebuilding after losing their long-time pitcher to graduation,” Gibson said. “This game was not as competitive as in years past.

“We need to focus on getting better every pitch.”