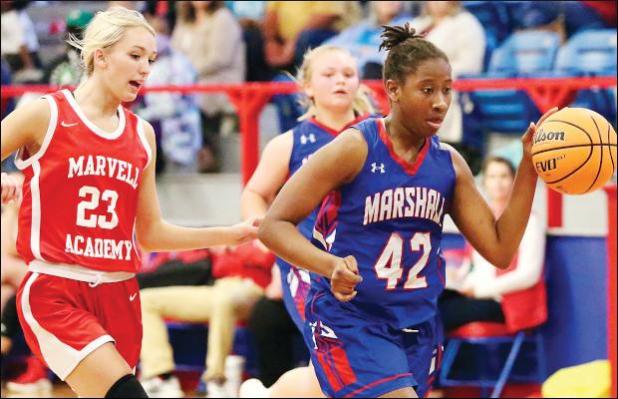 It was as if the basket had a lid on it the first half for the Marshall Academy Lady Patriots.

Leading by just six at intermission Thursday, the offense came alive in the third quarter as they went on to win their home opener, 3717, over Marvell (Ark.) Academy.

“The shots started falling in the third, and we played extremely well on defense the entire game,” coach Jeremy Ervin said.

The Lady Patriots fell behind 5-1 and trailed 7-6 at the end of the opening quarter.

They took their first lead at the 5:36 mark of the second on Karah Nicholson’s putback and never trailed again.

When Marshall’s Kailyn Smith scored in the lane to up the lead to 12-7, Marvell called a timeout to try to stop the home team’s momentum.

Smith’s three-point play, a basket and free throw, gave the Lady Patriots a 15-9 advantage at halftime.

To open the third, MA drilled three consecutive three-pointers — one from Nicholson and two from Hallie Turner. The lead was quickly 24-9. Meanwhile, the Lady Patriots held the Lady Eagles score-

less in the third. Smith’s layup at the end of the quarter upped the margin to 31-9. Marvell did not score its first bucket of the second half until the 5:37 mark of the fourth. MA won by 20. Smith led the Lady Patriots with 13 points. Turner followed with nine. The Lady Patriots (1-1) are scheduled to play Delta Streets at home Saturday, Nov. 7, at 5 p.m. Next Tuesday, Nov. 10, they travel to Marvell.