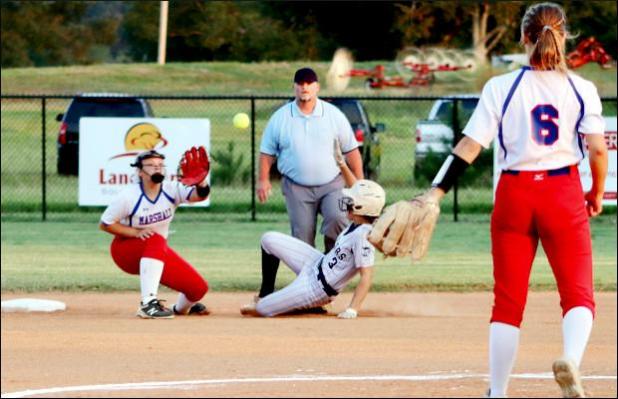 Photo by Angie Bain
Shortstop Kylie Gurley looks to reel in the throw at second as a Clinton Christian player starts her slide. In the foreground is Hallie Turner. 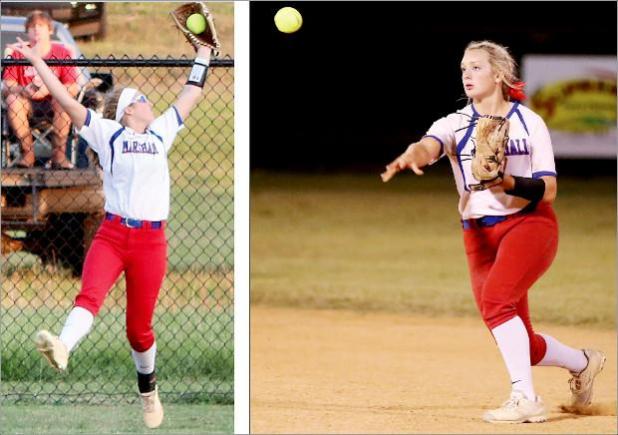 The Marshall Academy softball team wrapped up a stellar season Monday afternoon with a second-place finish in Class 3A.

The Lady Patriots, after losing game one of the state championship series by one run last week at home, dropped the second contest 8- 1 at Clinton. They finish with a 30-11 record.

The MA bats were silent for the most part Monday versus Clinton Christian, producing just two hits. One was a solo home run in the top of the sixth from Rayne Rippee.

Her sister, Zoey Rippee,Clinton Christian added one more run in the bottom of the sixth. had the only other hit, a single to start the fifth.

“We lost focus at the plate and our pitching struggled,” coach Carlton Gibson said. “We let their pitcher intimidate us. Hopefully we will learn from this loss. It left a bitter taste for sure.”

The Lady Warriors took a 1-0 lead in the bottom of the third.

Their big inning was the fourth, when they scored six runs, four of those coming off of homers – a solo shot and a three-run blast.

Clinton Christian added one more run in the bottom of the sixth.

The Marshall Academy defense committed two errors, while Clinton Christian had one error.

“We did not finish like we would have hoped but I’m still proud of this group,” Gibson said. “We have a great group returning next year and our hunt for another ring begins tomorrow.

“We will work hard in the off-season to get better.”

The Lady Patriots rallied big-time to tie game one of the 3A championship series but couldn’t snatch the win.

Trailing 4-1 at home Wednesday of last week, MA scored three in the bottom of the seventh. Then Clinton Chris tian picked up one in the first extra-inning and escaped Holly Springs with the 5-4 win.

“We showed a lot of grit fighting back in the seventh toIn the seventh, Z. Rippee got things started with a single to left field. Anna Lauren Bain singled to the opposite field.

Landry Loper reached on a bunt to load the bases.tie the game,” Gibson said. “I wish we would have had that energy a little earlier.

“We beat ourselves. You cannot give a team three runs in the first inning and expect to win.”

That 3-0 lead for the Lady Warriors was upped to 4-0 in the top of the fourth.

The Lady Patriots scored one in the bottom of the sixth.

Landry Loper reached on a bunt to load the bases.

In extra innings, a runner is placed on second to start a team’s turn at bat.

In the bottom of the eighth, Marshall left a runner stranded on third.

“We have to swing at strikes,” Coach Gibson said.

The Marshall defense, solid throughout the season, committed five errors.

The Lady Patriots outhit the Lady Warriors six to five.

“A big thanks to our seniors – they have been a great group to coach,” Gibson said. “We wish them all the best as they continue at their prospective colleges.

“A big thank you goes to our headmaster and board for all their support, and thanks to Marcus Moore for helping me this year.”