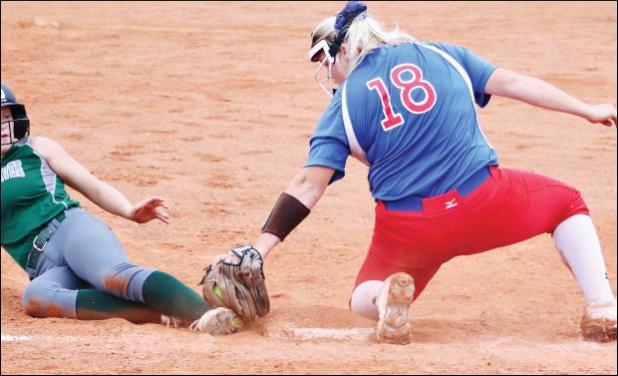 On Tuesday, Aug. 25, at home, coach Carlton Gibson’s Lady Patriots blanked North Delta School 10-0 behind the two-hit pitching of Hallie Turner. She struck out 11 and walked none.

“Hallie did a really good job in the circle, and our defense is playing good,” Gibson said.

Marshall got on the board in the bottom of the first when Kylie Gurley’s double scored Rayne Rippee, who had singled.

The Lady Patriots’ biggest inning offensively was the second when they scored four. R. Rippee had a single and drove in Anna Lauren Bain and Kamdyn Taylor.

Christa Schultz had an RBI in the second. Her fly ball to center scored Carlie Vannucci from third. MA added a run in the

It was a big day at the plate for R. Rippee. She had three hits and drove in three runs. One of her hits was a double.

Zoey Rippee had a double. Taylor had a hit and two RBIS. Gurley, in addition to her hit, had two stolen bases.

“Kylie, Rayne and Christa continue to see the ball well, and Kamdyn came through with a timely hit,” Gibson said.

“Hopefully, the girls will stay focused as we near the end of the regular season,” Gibson said.

The Lady Patriots (16-5) were scheduled to face Winston Academy at East Mississippi Community College in Scooba on Tuesday of this week.

Next Tuesday, Sept. 8, they visit Kirk Academy. On Wednesday, Sept. 9, they host Tunica Academy at 5 p.m.