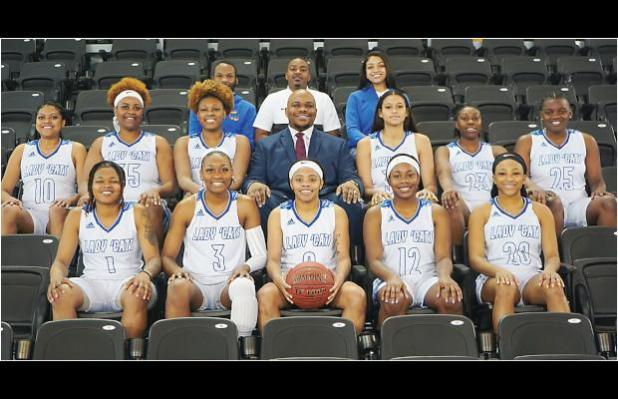 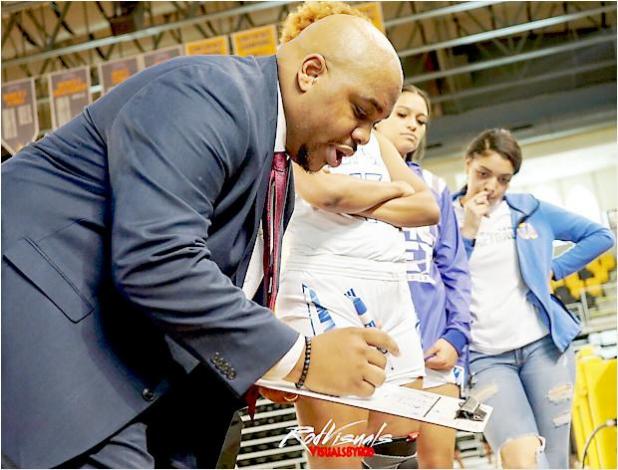 Head coach Eric Jackson Jr. outlines some instructions for his team during a timeout.

It was a season to remember for the Rust College Lady Bearcats.

He said the DNA of this group of girls was special.

"It was all about sacrificing for the betterment of the team," said Jackson, a former player at Holly Springs High and Rust. "A lot of the kids on this team had the ability to average 15 or 16 points a game. But there's only one basketball on the floor. So, everybody accepted their roles, and it helped tremendously."

The Rust women finished second in the Gulf Coast Athletic Conference (GCAC) regular season with a 12-2 record. Both losses were to Talledega College, which was unbeaten in conference play.

The Lady Bearcats won a first-round conference tournament game at home over Dillard University. They then lost in the tourney semi-finals at New Orleans, La., to Philander Smith College, a team they had beaten twice in the regular season.

"It's hard to beat a team three times," said Jackson, who was named the conference Coach of the Year.

The Rust women received a bid to the NAIA National Championship Tournament in Billings, Montana, but it was cancelled due to the Coronavirus pandemic.

They finished the season with a 25-6 record. The last time the Lady Bearcats won 25 games was in 1984, when they won the Division III national championship.

The Lady Bearcats were led by senior Keimeshia Walker of Atlanta, Ga., the conference's leading scorer the past two years. She averaged 18.6 points per game.

She was named the GCAC Player of the Year, was on the all defensive team and was named an NAIA All-American.

"She scored 1,000 points in two years and the list of her accomplishments goes on and on," Jackson said.

A couple of local girls made big-time contributions ­ Shay Johnson from Byhalia and Katie Blackmon from Olive Branch. Both were Dandy Dozen players in high school.

Johnson was named AllGCAC Second Team. She averaged 8.3 points per game and dished out 93 assists.

Coach Jackson also wanted to praise Lisa Crawford of Belzoni and Andria Carter of Philadelphia, the only two players who have been at Rust all three years with him.

"They were my first two recruits when I got the job," he said. "They've been here during the whole rebuilding process."

"They started that first season and we went 14-10, and then as additional talent came in, they had to sacrifice for the team and come off the bench. They did that gracefully ­ which is not easy to do."

Jackson played for coach Naylond Hayes at Holly High. He was a member of the state championship teams in 2004 and 2005. He graduated from Potts Camp High School in 2006. Jackson then played for

coach Rodney Stennis at Rust and graduated in 2011.

"It's definitely an honor to come back to where I grew up and work in a community that has always supported me," he said.

Before coming home, he coached at a high school in Jacksonville, Fla., and Concordia College in Alabama.

Jackson said the goal is building something positive at Rust.

"I wanted to give this community something to cheer about," he said. "Being a Holly Springs grad and a Rust grad, that inspired me."

The team's motto ­ "Why not Rust?" "I want kids to know, if you come to Rust, you can be a part of something special," he said. "The success of this year's team has given us something positive to talk about."

Jackson is excited about the future, too. Not only is he pulling in Division I talent to Rust College, but local talent, too.

"Recruiting the local talent is really important to me," he said. "I want them to realize they can stay in this area and play championship caliber basketball. It's starting to happen, and I'm excited about that."