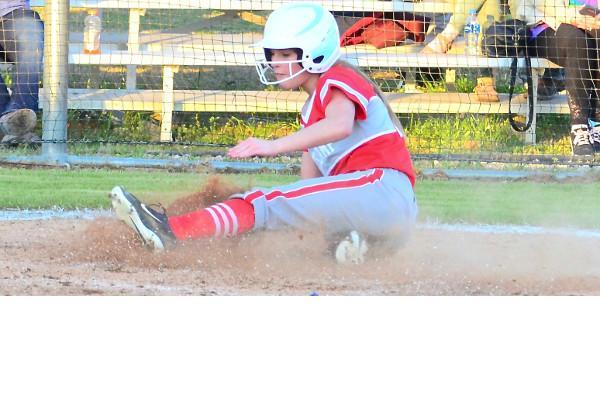 Leading the 10-hit offensive attack for Potts Camp in game one were Kylie Gurley with two hits, including a triple, and three RBIs and Kamdyn Taylor with two hits and one RBI.

Getting one hit and two RBIs each were Irianna Turnage and Jenelle Davis.

Davis earned the win from the circle. She pitched the full three innings, in the shortened game due to the run rule, and gave up no hits. She struck out four and walked two.

The Lady Cardinals, coached by Cory Gray, then had 12 hits in the second game.

Muse drove in three runs with a homer.

Adding one hit each were Faulkner, Halie Marquand and Regan Waddle.

Cadence Wait was the winning pitcher. She struck out seven and gave up one hit.

Potts Camp let a 6-3 lead after two innings slip away.

The Lady Eagles rallied with two in the third, one in the fourth, four in the fifth, one in the sixth and two in the seventh, while the Lady Cards failed to score in any of those innings.

Potts Camp had four hits – two from Waddle and one each from Anna Work and Gurley.

Wait pitched six innings and took the loss. She struck out five, walked three and gave up 10 hits. Davis threw one inning and struck out two.

The Lady Cards (3-3) visited Hickory Flat on Tuesday of this week in district action. They will host Strayhorn Friday at 5 p.m. Next Monday, April 1, they will host Ingomar at 5 p.m.