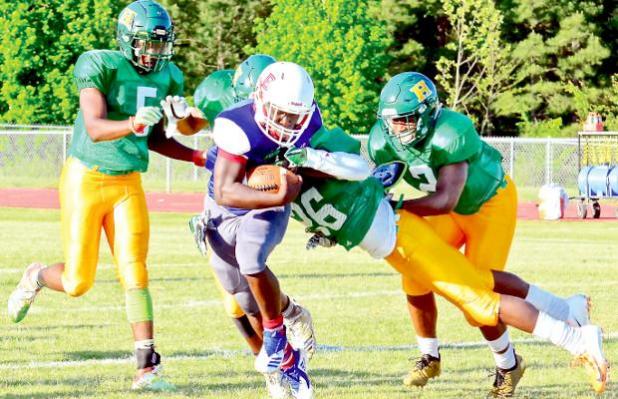 Byhalia squeezed in 11 spring football practices around all the rainfall and wrapped things up by hosting a jamboree.

“The rain hurt a lot of people, I’m sure, not just us,” head coach John Danley said. “But overall, it was a pretty good spring. The kids practiced hard and learned a lot. I saw a lot of growth in a lot of areas.”

“Memphis Central will be one of the top teams in the City of Memphis and in the entire State of Tennessee,” Danley said. “They’re a very good team – averaging about 300 lbs. across the front. They’re very physical.

“It was a good challenge, and you know me, I like for us to play up in competition. That’s the way you improve.”

Byhalia returns a good nucleus from last year’s team, which finished 6-6 and lost at Louisville in the opening round of the Class 4A state playoffs. The Wildcats went on to win the state title, the ninth in school history.

“We have some starters coming back – some seniors who have started since they were in the 10th grade,” Danley said. “They will need to step up and be leaders for this team.”

The Indians will also be dropping in classification to 3A. New district foes will be Water Valley, North Panola, Senatobia, Holly Springs and Independence.

“It will definitely not be a cakewalk, even though we are moving down,” Danley said.

Water Valley won the Class 3A state championship last season; North Panola was the North Half runner-up; and Senatobia was second in Region 1-4A.

“And Holly Springs has a new coach and looked really good in our jamboree,” Danley said.

However, he said his Byhalia football team will be up to the challenge.

“We have to put up or shut up,” Danley said.

“I think everybody is expecting a big year. We have to stay healthy and put in the work, and I know we will get better. By district time, hopefully we will be ready to rock and roll.”

This summer, the Indians will be “pumping iron,” he said, and participating in seven-on-seven competition.

Byhalia will kick off the 2019 season at home on August 23 versus Bluff City (of Memphis, Tenn.) and then go to Manassas (of Memphis) on August 30. The next four non-district foes are Lewisburg Septem ber 6 at home, Wooddale (of Memphis) September 13 at home, Center Hill away on September 20 and Gentry at home on Saturday, Sept. 28, for homecoming.

District play kicks off October 4 when the Indians visit Water Valley. Following the next four Friday nights will be North Panola (home), Senatobia (away), Holly Springs (away) and Independence (home).