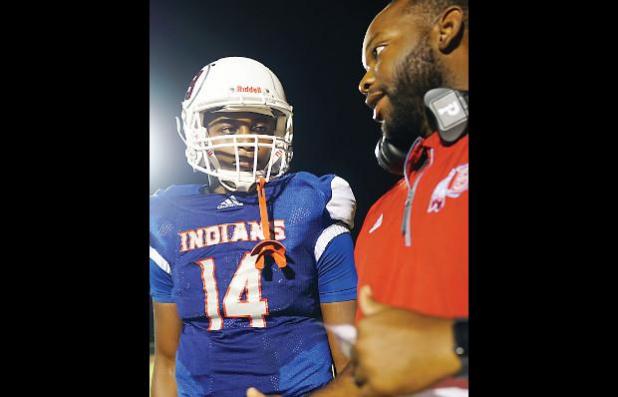 The Byhalia Indians are off to a 2-0 start but their head coach still sees plenty of room for improvement.

Last Friday night the Indians downed Manassas (Tenn.) 28-8 at home. The lead was 14-8 at halftime.

He caught touchdown passes of 9 and 60 yards from quarterback DeQuan Moore and also had scoring runs of 55 and 25 yards.

Zeric Weaver was four of four on extra-point kicks.

The Tigers’ only touchdown came on an interception return.

The Byhalia defense has not been scored on in the first eight quarters of the season.

“The defense is playing tough, but we’re giving up too many first downs,” Danley said. “We’re not getting off the field on third down. We’re spending too much time on the football field. And I know we are better than that.”

Offensively, he said the Indians have to improve in the passing game.

“The offensive line is playing at a high level,” Danley said.

“DeQuan (Moore) is still working on getting his rhythm. We’re missing some open receivers.”

Next up for Byhalia is a third straight home game to open the season. The Class 3A Indians welcome Class 6A Lewisburg to town this Friday. Kickoff is set for 7 p.m. The Patriots are 1-1 on the season. They defeated Center Hill on August 23 and then lost 19-16 to Rivercrest (Ark.) last Friday night. “We have to keep getting better as a football team,” Danley said. “We will be back at work on Monday (Sept. 2, Labor Day) while everybody else is eating barbecue.”