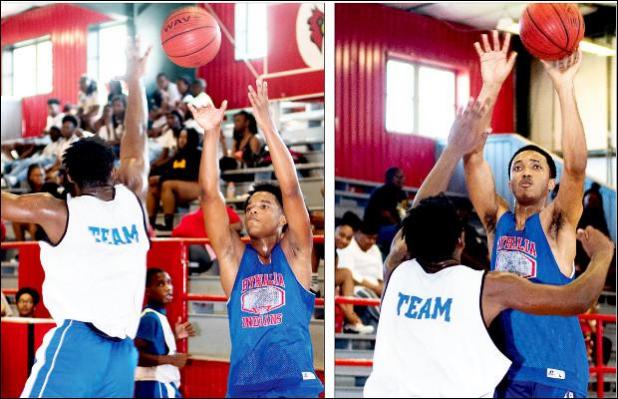 The Byhalia Indians lost a lot of key basketball players to graduation but coach Derwin Cooper sees good things on the court this summer.

“We’re playing great and jelling,” he said. “Those guys will be missed, but others just have to step up.”

Gone are seven seniors, Jerell Brounson, Kavonte Tunstall, Antwon Porter, Denzel Guy, Demetrius Jones, Nick Jones and Arronday McGrath. They helped lead the Indians all the way to the Class 4A state semi-finals and a 20-10 record.

Next season’s group has had a busy summer. They’d played 11 games and won eight going into the last scheduled ones of the summer this past week.

“We’re playing great, collectively as a team,” said Cooper, who will enter his second season as head coach of the Indians. “We’re hustling and sharing the basketball.

“They understand the game and my philosophy – what I expect of them.”

The new Indians will be small sizewise, he said, but he still expects a solid inside-thelane presence.

“The guards are playing good, and we’re crashing the boards well,” Cooper said.

“We’re just trying to get better and build chemistry.”

He said the younger players witnessed last season’s success, and that makes it easier.

“The summer has showed me a lot about this group,” Cooper said. “They’re buying into the program. That’s what we’re doing – building a program.

“It has been a team effort this summer. And it’s up to me, as the coach, to understand the players’ strengths and weaknesses and build on that.”

Byhalia is moving down to Class 3A for the next two school years. District foes in Region 2 will be Marshall County rival Holly Springs, Independence, North Panola, Senatobia and Water Valley.