Photos by Scott Boyd/Macon Beacon
Byhalia's Jacorian Smith tries to get past a Noxubee County Tiger as he picks up yardage Friday night. 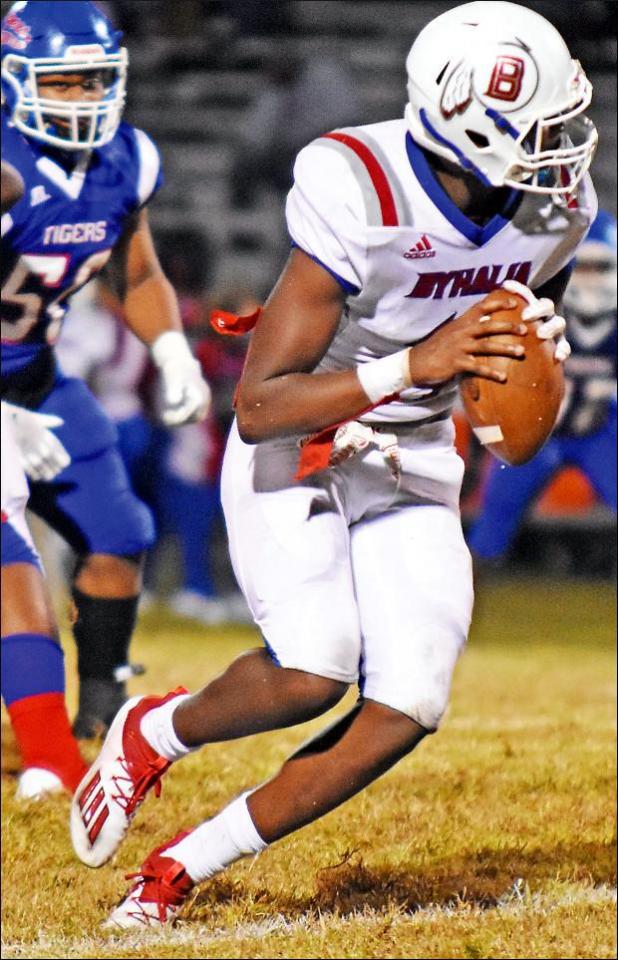 DeQuan Moore of the Indians finds some running room.

Indians go out in round one at Noxubee Co.

John Danley, head coach of the Byhalia Indians, knew his opposition in the first-round of the Class 3A state football playoffs was going to be really good. But he learned even more in person.

“They were just too explosive for us, and I thought their defense was even better than their offense,” he said.

Bobby Shanklin put the Tigers on the scoreboard in the first minute of the game.

Byhalia answered with a touchdown from DeQuan Moore to tie the game at 6. Then it was all Noxubee County the rest of the way. B. Shanklin scored twice more to make it 21-6. It was 356 by the end of the first quarter as the Tigers’ Antonio Fowler scored and then Zack Andrews got a pick six for the home squad.

Noxubee’s second-quarter touchdowns came from Anthony Little and Derrick Shanklin. It was 48-6 at intermission.

Martavious Wicks wrapped up the Tigers’ point production in the third.

“I thought we had a good game plan going in, and we got that first touchdown, and then defensively they adapted so fast,” Danley said. “They just pounded us on everything we tried to do.” He said it was good for his young team to experience the playoffs.

“Bottom line, we played a really, really good football team, and their kids were more seasoned and more experienced than our kids,” Danley said.

He named Moore the most valuable player for the game. He said Moore, after being moved from quarterback late in the season, played a major role offensively at receiver and defensively at linebacker.

“He demonstrated a lot of school spirit and pride,” Coach Danley said.

He said the Indians, who finished 2-6, have a good nucleus returning next season, and “we should come back strong.”

Those returnees include the top runner, Rayderrius Proge, and quarterback Dustin Grisham.

“We knew this was a rebuilding year for us, and then we didn’t get a spring or summer (due to COVID-19),” Danley said. “Our downfall was a lack of time in the weight room. We have to be able to play physical football.

“But experiencing the postseason, that’s always a plus.” Danley thanked his 10 seniors for their hard work and many contributions to the Byhalia High School football program.