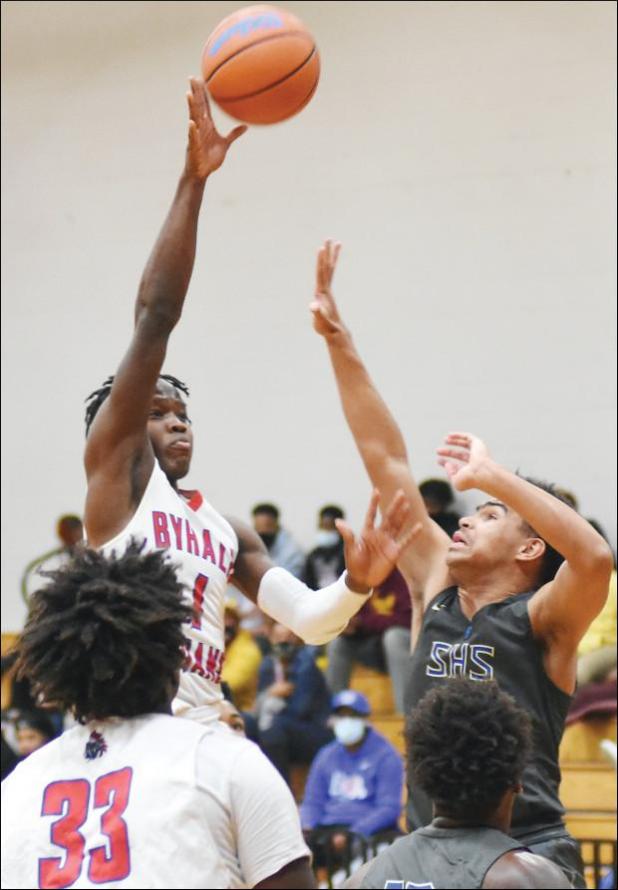 The Byhalia Indians tipped off the District 2-3A portion of their schedule successfully.

On Tuesday of last week at home, coach Derwin Cooper’s team survived a couple of Senatobia rally tries and won 54-49.

“It was good to get off to a good start in district play,” he said. “It’s one game at a time.” The Indians dominated in the first half. Jerrick Wooten and Desmond Martin hit backto-back shots to make it 16-6 late in the first quarter.

DeQuan Moore’s jump shot pushed the advantage back to 14 to open the third.

The Warriors then went on a 10-run to cut their deficit to four. At the 3:24 mark of the third, the visitors actually went ahead at 30-29.

Byhalia then had a big run of its own, outscoring Senatobia 10-0 to wrap up the quarter and take a 39-30 lead to the final period.

Jacorian Smith’s baseline move and dunk put the Indians on top by 12 with 5:14 remaining. Then he got a steal and a three-point play to stretch it to 50-35.

But once again, Senatobia did not go away. With 1:53 left, the Indians’ lead was only two.

Jamarion Austin and Moore hit clutch free throws down the stretch as Byhalia won by five.

“We have to learn to put together a complete game,” Cooper said. “We played great at times and then subpar at times. But overall, it was a great win, and we played cohesively overall.”

He said his guard play has to improve. The Indians had more than 20 turnovers. “We have to cut down on that if we expect to win consistently,” Cooper said.

“We’re shooting free throws better this year, and that was the difference down the stretch.” Austin finished with 15 points and 14 rebounds. Scoring 14 each were Wooten and Smith. Moore added nine.

In the first game of the night, the Lady Indians lost 4717 to Senatobia, the defending Class 3A state champion.

Byhalia was not able to score its first bucket until the 6:04 mark of the second quarter and was down 29-5 at the half.

Jasmine Malone had all five of the Lady Indians’ secondquarter points and finished with 12 of the 17.

The Byhalia boys almost let a big lead slip away Friday night. They escaped with a 6260 win over district opponent Water Valley. The Indians seemed to be in control, leading 49-36 at the end of three quarters. The Blue Devils wouldn’t go away, outscoring Byhalia 24-13 in the fourth. But the Indians made the plays they needed to make two.

Four Byhalia players scored in double figures –Wooten with 16, Smith with 14 and Derrick Beard and Ka nann DeBerry with 10 each.

The Lady Indians, still looking for their first win, turned in what coach Alainey Hughes call “their best game of the season” but fell short, 51-38, versus the Lady Devils.

“We are improving with each game,” she said. “The girls are getting more comfortable playing together and players have been stepping up. We just have to work harder to finish close games.”

Smith and Wooten combined to score 35 – Smith with 19 and Wooten with 16. Derrick Beard had nine.

Malone scored all 23 of her team’s points.

“We only played with four, and it was not due to illness,” said Coach Hughes, who has only a six girl roster.

“It was a 10-point ball game most of the way until I had one foul out in the fourth,” she said. “I am extremely proud of the effort and hustle these girls showed. I couldn’t have asked for anything more from these young ladies.”