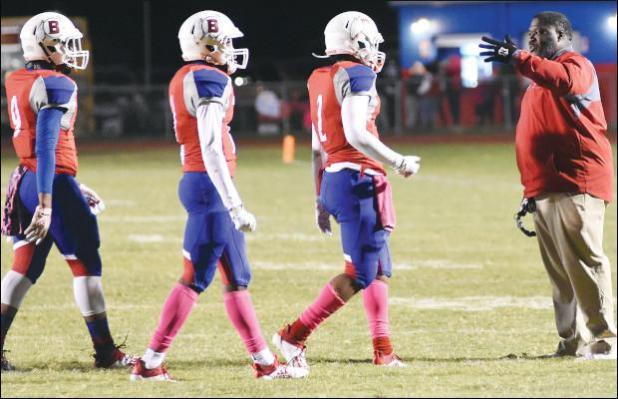 File photo by Barry Burleson
Listening to some instruction from head coach John Danley (right), in a game earlier this season, are (from left) Byhalia Indians Kajavious Thomas, Jerrick Wooten and Jacorian Smith.

The resurgent Byhalia Indians are packing for the playoffs.

Coach John Danley’s team traveled to Independence Friday night and left with the win it needed, 28-27.

“The kids really stepped up and played hard,” he said. “They willed themselves to that win.” Byhalia had a couple of regular season games cancelled by Memphis, Tenn., opponents (due to COVID19), lost to a pair of larger DeSoto County schools and dropped their first three games in District 2-3A play.

Then. Week before last, the Indians snatched some momentum with a district win over cross-county rival Holly Springs.

“We got one win and that let them feel it,” Danley said. “We had a chance to say, `hey, we can win.’ And getting that one win under our belt carried over to the next one we had to have at Independence.”

The Indians (2-5) will travel to Noxubee County this Friday night in the opening round of the Class 3A playoffs.

Against Independence, last Friday, defense led the way. Danley said he made some changes personnel-wise, and they’re paying off.

“Those adjustments have sparked us,” he said.

“The offense couldn’t get going Friday. We had some missed opportunities.

“The defense carried us. We came up with some big stops.” After a scoreless first quarter, the Wildcats took a 7-0 lead with 8:32 to go in the second.

Jerrick Wooten returned the ensuing kickoff to inside the Independence 20. Rayderrius Proge scored on a 15-yard run. A two-point try was not successful.

A couple of minutes later the Wildcats went up 14-6.

The defense held Independence out of the endzone after the first one, but not the second. With 1:10 left until halftime, the Wildcats scored and led 21-6.

Then Wooten provided some much-needed spark for Byhalia. He returned the ensuing kickoff 70 yards for six points. DaQuan Moore cashed in the two-point conversion.

Byhalia, thanks to its defense, survived another turnover to open the second half.

At the 4:33 mark of the third, Proge got loose for a 60yard touchdown run. The tryfor-two failed, and the Indians were down one.

“Our running game was a little slow in this one, but Proge came up with a couple of really big runs,” Danley said.

Byhalia took its first lead three minutes into the fourth. This touchdown came from the defense as Jacorian Smith got the interception and returned it 50 yards for the score. He also carried for the two-point conversion. It was 28-21. About a minute later the

Wildcats answered with a touchdown. But the Indians’ Makylan Pounders blocked the extra-point kick to preserve a one-point lead.

Late in the game the Byhalia defense stepped up one more time, getting a stop on fourth down.

Then the offense was able to pick up a first down and run out the clock.

Defensive leaders for the Indians, according to Danley, included Prince Bentley, Moore, Pounders and Smith.

“Bentley set the tone on defense,” he said, “with some big tackles and sacks.” Moore, who recently made a move to linebacker, “played a great game,” Danley said.

“Pounders didn’t come off the field all night (defense or offense). He proved why he is a Dandy Dozen player.

“And Smith had the play of the game with the pick six. That solidified the win.” Wooten and Smith, both standout basketball players, decided to play football, too, their senior years.

“Wooten gave us a big-time play with the kickoff return,” Danley said. “I’ve bragged on this kid all year. He works so hard, and he had never picked up a football until July. He’s amazing.

“And Smith, he’s been a leader of our team all year. He contributes a lot on both sides of the football.

“They showed a lot of school pride by coming out and helping the football team.” Next up is the post-season and a 160-mile road trip to face Noxubee County. The Tigers (6-1) are the District 4-3A champions with a rich football tradition.

“They’re always in the mix,” Danley said, “but we can’t run from them. We know it’s a tough task, but we do have some momentum going. We just have to go down there and play extremely well.

“I know Noxubee County will have some great athletes, but I also know they make their name on the defensive side of the ball.”

The Byhalia-Noxubee winner will face Booneville in round two November 13.