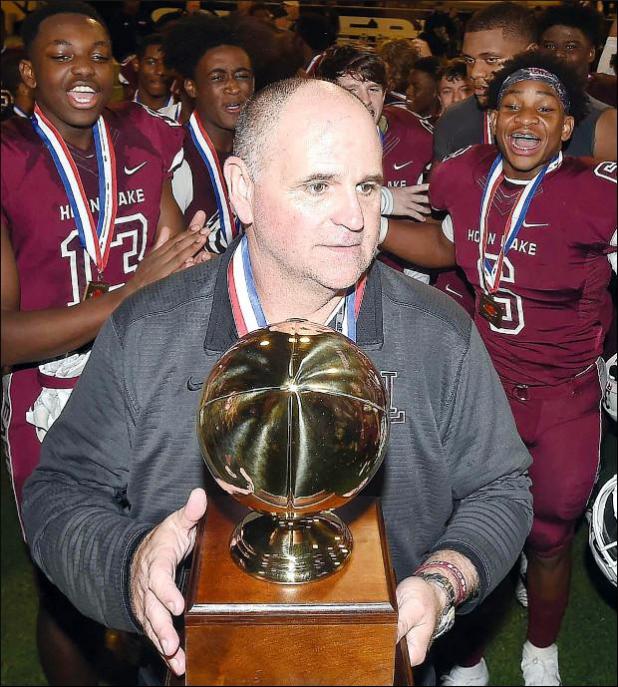 Photo courtesy of DeSoto Times-Tribune
Brad Boyette, a Holly Springs native, takes the Class 6A state championship trophy in 2018 as some of his Horn Lake Eagles celebrate in the background.

There's been a changing of the guard at the top of the Horn Lake High School football program as veteran head coach Brad Boyette has announced that he's retiring and departing from the school.

At the same time, offensive coordinator Mitchell Harville was announced as the team's new head coach.

Boyette, who led the Eagles to the 2018 MHSAA 6A state football championship, informed the DeSoto TimesTribune of his departure Monday morning, June 1, an announcement that came after talking with his team.

"The best part of that meeting was the fact that they knew immediately who the new coach was," Boyette said. "For teenagers, the most fearful thing is uncertainty." Harville, an assistant coach

at Horn Lake the past 15 years, takes over after spurning other coaching opportunities.

"He's opted to stay here in lieu of other head coaching job offers, and the rest of the staff is staying intact," Boyette said of Harville.

"The biggest gift any coach has ever received is the staff Coach Boyette left me at Horn Lake," Harville added.

The 2018 Eagles put together an unbeaten 12-0 season, climaxed by a 31-27 state championship victory over Oak Grove at Southern Miss. The team also produced the year's high school Butkus Award winner as the nation's top linebacker in Nakobe Dean, now a sophomore linebacker at Georgia.

Last year's squad was 5-7 and lost to Starkville in the first round of the 6A playoffs.

The 2018 squad was always called a "special" group by Boyette.

"It was the way they approached everything," he explained. "From the look in their eye to their going to the weight room. Their daily workouts were different from any other group. They had a purpose, they were intentional about their purpose, and they were on a mission."

He is a native of Holly Springs and a 1985 graduate of Marshall Academy.

Building a championship program takes a mix of great coaches and players, but Boyette credits a lot of the Horn Lake success to working with and getting support from principal Andy Orr and athletic director Donnie Weeks.

"When I got to Horn Lake there was a huge gap between where Horn Lake football was and the rest of that division," Boyette said. "We laid out some very clear goals that we wanted to accomplish and that started with our principal Andy Orr, our athletic director Donnie Weeks and myself. We were able to hire the staff and implement our plan. It was an effort of a lot of people and it was a lot of fun coming to work every day."

Harville came to Horn Lake in January 2007 and came to a place that he enjoys calling home.

"I love Horn Lake and I love the kids," Harville said. "There's something special about this place. The administration, the support, all that's been here is hard to find. I just walked into a position where all of that was handed to me."

Harville told his players not to expect big changes and will work with Boyette's "recipe for success," adding, "We are who we are and we'll do the things that we do."

Boyette's decision also affects Hernando softball as his wife Lee has been an assistant coach for the Lady Tigers' softball team and she will be leaving that program.