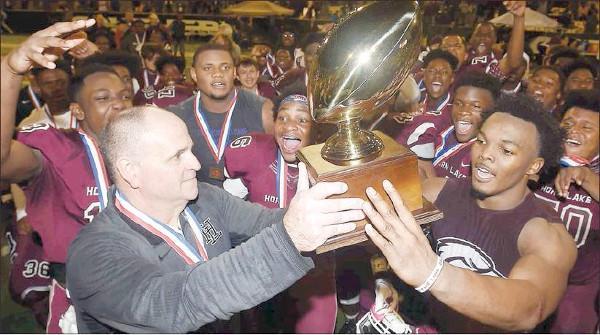 Photo by Chris Todd
Coach Brad Boyette and his Horn Lake Eagles celebrate a state championship November 30 on the University of Southern Mississippi campus in Hattiesburg.

Brad Boyette was raised in Holly Springs on things like hard work and caring for one another.

“Mom and Dad never had to tell me about working hard and putting in the hours,” he said. “I lived that every day.”

“And in Holly Springs, there were always people around you who truly cared about you – true friendships.”

Boyette has instilled those important traits and more in his Horn Lake football team. And the big reward came on the last day of November, a Class 6A state championship.

“It’s great to be in charge of a group of kids who had this opportunity,” he said. “It was very rewarding.”

Boyette grew up in the area of Chesterman and Van Dorn. There were two family businesses – Johnnie’s Drive-In and Boyette’s Grocery.

The son of the late James and Johnnie Mae Boyette was delivering groceries when he was about 12 years old.

“They certainly taught me – don’t be scared of hard work and working long hours,” he said.

He is a 1985 graduate of Marshall Academy. He played football there for Johnny Hill.

“I admired what he did and I had a lot of respect for him,” Boyette said. “He was a role model. Being around a guy day-in and day-out who had a passion for the game, it put in my mind at an early age that I wanted to do what this guy does.”

And other classmates also selected education and coaching as a career – like Shane Crawford, Johnny Ray, Shane Stone and Jerry Moore.

“It was not by coincidence,” Boyette said. “For a small group, that’s a high percentage of people going into education and coaching.”

He said what he learned in his early years in his hometown is a big part of his fiber today.

“Even people not in your family, if you were doing something you were not supposed to, they would set you straight,” he said. “It was a community that cared about the people in that community.”

Boyette, 50, attended Ole Miss four years and earned his degree there. Coaching stops then took him to Holly Springs High School, Olive Branch, Horn Lake, Northeast Community College and then back to Horn Lake as head coach in 2012.

When he took over the Eagles’ football program, there was a big gap between the Eagles and other area 6A teams going to the playoffs year-in and year-out.

“Horn Lake had been to the playoffs two times in school history,” Boyette said.

“Our first goal was working to close that gap and get this program competitive within the division. And to do that, a lot of things had to take place.”

First, things had to be done differently at the middle school level, he emphasized.

“When I got here, there were 24 players in the eighth grade,” Boyette said. “At the 6A level, that’s way low. So goal number one was to create interest in football starting at the elementary level.”

This year there were 74 players in the eighth grade, tripled from 2012.

“We also had to put a much greater focus on strength and conditioning,” Boyette said.

And there had to be a change in attitude.

“I certainly cannot take all the credit,” Boyette said. “I have great assistant coaches and a tremendous administration here at Horn Lake.

“All these things together allowed us to compete for a state championship.”

When he took the job, South Panola was the dominant 6A school, not just in the division but statewide.

“Two years ago, it was a very close game (7-0 loss),” Boyette said. “We walked off the field thinking, ‘Hey, we’re close versus the benchmark in this league.’

“To win those games solidified that we are a true contender.”

The Eagles defeated Oak Grove 31-27 on November 30 in Hattiesburg for the Class 6A crown and finished 15-0. State title games this year were played at M.M. Roberts Stadium on the campus of the University of Southern Mississippi in Hattiesburg.

Boyette’s Horn Lake squad was filled with talent – including Nakobe Dean, the Mississippi Gatorade Player of the Year and the High School Butkus Award winner for the top linebacker in the country.

“He’s one of the best students in the country, too,” he said.

Out of 22 seniors, eight or nine will continue their football careers.

“This entire group of seniors is an outstanding group,” he said.

Three will sign at Power 5, Division I schools. The other two, in addition to Dean, are quarterback Raydarious Jones and linebacker Michael Campbell.

On Wednesday of last week, Dean committed to Georgia and Jones to LSU.

“It’s great to be in charge of a group of kids who have the opportunity to play at another level,” Boyette said. ‘It’s very rewarding.”

The response from the community after bringing home the state championship trophy has been overwhelming.

“Any community is looking for something good to be a part of,” Boyette said, “and this football team (93 members strong) gave them something to be proud of.

“People can pull out their Horn Lake stuff and wear it with pride.”

And he knows his friends and family in Holly Springs are equally happy for the hometown boy and his Horn Lake Eagles.

“I’ve had so many calls from home,” he said. “And yes, it’s still the place I call home. It’s a place where I know people deeply care about me. And that’s humbling.”