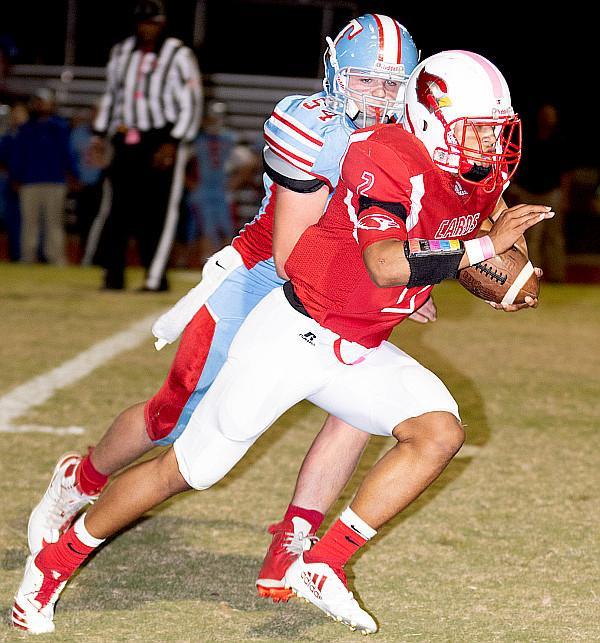 Photo by Dillon Day
Jabryan Pegues (2) of Potts Camp runs away from a Thrasher player. 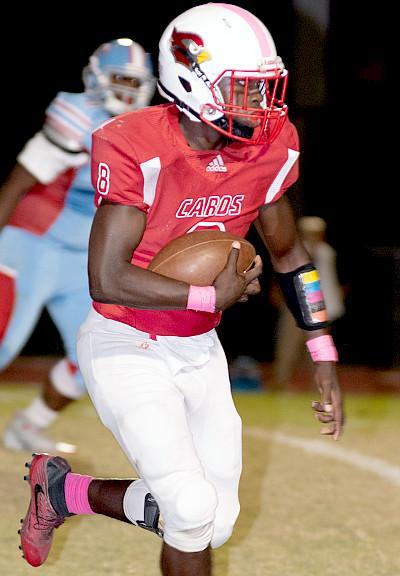 Photo by Dillon Day
Antrell Tucker (8) of Potts Camp finds some open field as he carries versus Thrasher Friday night.

Potts Camp got just what the doctor ordered Friday night – a win.

The Cardinals came out of the starting gate strong and crushed Thrasher 57-6 to make it a successful homecoming.

“It was a good night,” said Darrow Anderson, whose team ended a five-game losing skid. “We played hard and executed well – no mistakes. And we created three or four turnovers.”

Four different Cardinals got touchdowns in the opening quarter.

Ryan Baldwyn blocked a punt and returned it 27 yards for the score. Antrell Tucker carried for the two-point conversion.

Jabryan Pegues scored on a 24-yard run. Tucker again cashed in the two.

Dakota Moore had a 43-yard touchdown reception from Collin Massengill. Tucker tacked on his third two-pointer.

Then Javian Walton got loose for 63 yards and six points. Massengill kept for the conversion.

“We did what we needed to do,” Andersonsaid. We came out early and jumped on them.”

Tucker had a 42-yard interception return for a score. Shun Gardner kicked the extra point.

Then Pegues had another touchdown run. The extra-point try missed the mark.

In the third, Devin Sanders carried to the end zone from 14 yards away. The point-after attempt was blocked.

Thrasher got on the scoreboard in the third via Shawn Dalton Weatherbee’s 62-yard run.

Potts Camp (2-6 overall and 1-4 in the district) closed the scoring when Josh Blake carried six yards to the end zone in the fourth. The extra-point kick was blocked by Thrasher.

“We needed the win,” Anderson said.

“We will take it and try to improve on it. We have a good chance to finish strong.”

Next up is a road trip to Ashland this Friday night. Then the Cardinals will visit H.W. Byers Thursday, Oct. 25, before finishing the season at home versus Okolona November 2. All are district games.

“We have something to build on going to Ashland this week,” Anderson said.