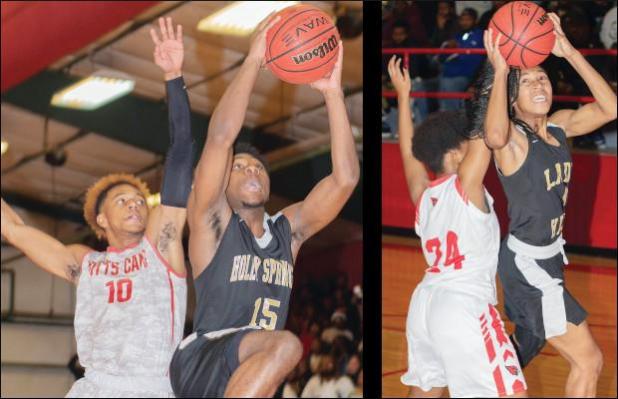 Holly Springs went into a jam-packed, sold-out gym at Potts Camp December 17 and departed with a sweep in the Marshall County rivalry.

The Class 3A Hawks and the 2A Cardinals are two of the state’s best – gold ball contenders in the respective classifications.

But on this night, it was all Hawks, who stormed past the Cardinals 100-55. It was Potts Camp’s first loss of the season.

“I’m proud of my guys,” said Kenzaki Jones, the Holly High head coach who formerly coached Potts Camp. “I felt like we had a good game plan going into the game, and we managed to execute all night.

The Hawks, led by Tyhem Reaves, Derek Fountain and Cori Bell, erupted for a 25-10 lead at the end of the first quarter.

“It was good to see some of our guys shoot the ball better,” Jones said. “We started out playing a little selfishly but by the second quarter, we were able to play some pretty good basketball against a great Potts Camp team.”

Reaves blistered the nets. He hit 12 of 17 from the field and finished with 27 points.

Fountain was equally as hot. He connected on 11 of 15 from the field and added 26 points.

Also part of a balanced scoring attack for Holly High were Bell with 17 and Dylan King with 10.

Top point producers for Potts Camp were Mitchell Saulsberry and Martavious Frost with 16 each. Walter Hamilton followed with 11.

Fountain and Anthony Gulledge Jr. were big on the boards for the Hawks, grabbing 11 and nine rebounds, respectively. Cadarius Autry and Bell each dished out five assists.

It is the only time the two teams will meet this season.

“Hopefully we can keep the rivalry going next year,” Coach Jones said.

The girls game was a close one with the Lady Hawks puling out a 67-59 win on the road.

Julia Vaughn had a huge night for Holly High. She scored 26 points, grabbed 12 rebounds and had six steals.

Potts Camp’s Brenya Muse poured in a game-high 28 points in the loss.

“The atmosphere was filled with excitement for the county rival,” said Andre Jones, head coach of the Lady Hawks. “Both teams competed until the clock was off.

“I commend the Lady Cardinals on their hard work and effort. We were fortunate for the hustle plays created by our defensive effort. It was definitely a team win based on the stats, and it showed on the court.”

Malasha Faulkner was also in double digits for Potts Camp. She scored 13.

“This was a huge win for us, hopefully one that will give us some momentum going forward,” Coach Jones said.

The Hawks (9-3) and the Lady Hawks (7-5) hosted another county rival, Byhalia, this past Friday night.

The Potts Camp Cardinals went to 10-1 on the season and Lady Cardinals 6-7.