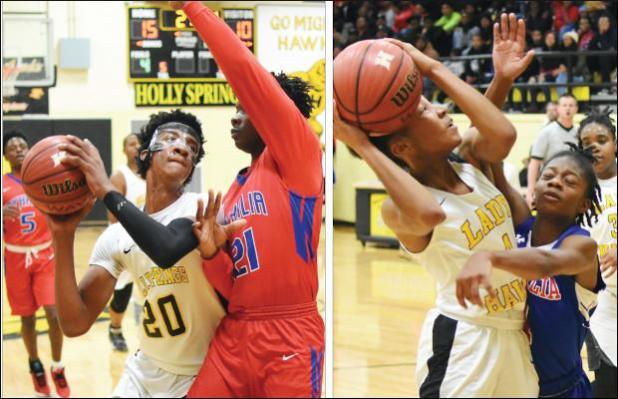 The Holly Springs versus Byhalia intra-county rivalry means even more this season.

Redistricting puts both in Region 2-3A, and it was Holly High squads who picked up all-important victories at home on December 20.

The Lady Hawks built a 16-point advantage over the Lady Indians but had to hold off a Byhalia charge to win 49-38.

“It was a very exciting district and rivalry game which made it even more competitive,” said Andre Jones, head coach of the Holly High girls.

“We got off to a good start defensively and led more than 10 points in the third. I commend the Lady Indians as they narrowed the lead to single digits going into the fourth quarter.

“We were able to mend together in the end to secure the win. It was a great team win.”

The Lady Hawks led by seven in the first on a bucket by Julia Vaughn.

Byhalia’s Darianna Wilson drilled a three at the 3:55 mark of the second quarter to pull her team within 18-15. Holly Springs led 23-15 at halftime. Lady Hawk Dajah Turner opened the third with a three, and Holly High kept expanding its advantage. The lead was 33-17 when Kennedy Faulkner scored with 1:15 remaining in the third. Then a couple of HollySprings turnovers led to Byhalia baskets. Jasmine Malone sliced the Lady Indian deficit to 10, and the visiting squad trailed 33-26 at the end of the third.

Vaughn’s 20 points led Holly High. Turner was next with 11.

The story in the second game of the night was much the same. The Hawks surged in front by as many as 20 in the first half but the Indians didn’t go away, cutting the deficit to four before falling 72-58.

“Once again I am proud of my guys and the way we approached the game versus our county rival, Byhalia,” said Kenzaki Jones, head coach of the Holly High boys.”

“It’s always great to have a packed house and good competitive basketball before the holidays.

“Byhalia has a good team and will be tough to beat down the road. We must continue to get better each day.”

Cori Bell ignited the Hawks early with a dunk, making it 4-0.

Tyhem Reaves of Holly High sank a three to end the third. It was 53-43 in favor of the Hawks.

Another Bell slam pushed the lead to 12, but the Indians would not go away. McKinley Wooten’s two points pulled them to within four, 57-53, with 3:52 left.

Bell got a steal and passed to Reaves, who scored, and then Reaves added a steal and a dunk to recapture the momentum and put Holly High ahead 66-55 with 1:07 remaining.

Derek Fountain dunked in the closing seconds, and the Hawks won by 14.

Top point producers for Holly High were Reaves with 27, Fountain with 19 and Bell with 10.

Leading Byhalia were Jacorian Smith with 18, Ra’mond Tuggles with 11, M. Wooten with 10, Xzaverion Crockett with 10 and J. Wooten with nine.

“That’s the most important part of all,” Coach Jones said.

Teams were next scheduled to play in some holiday tournaments.