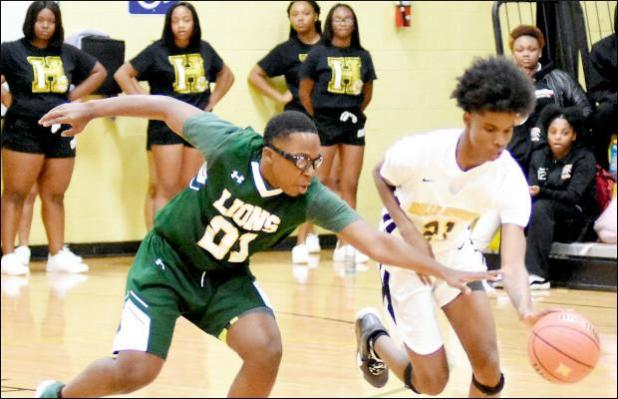 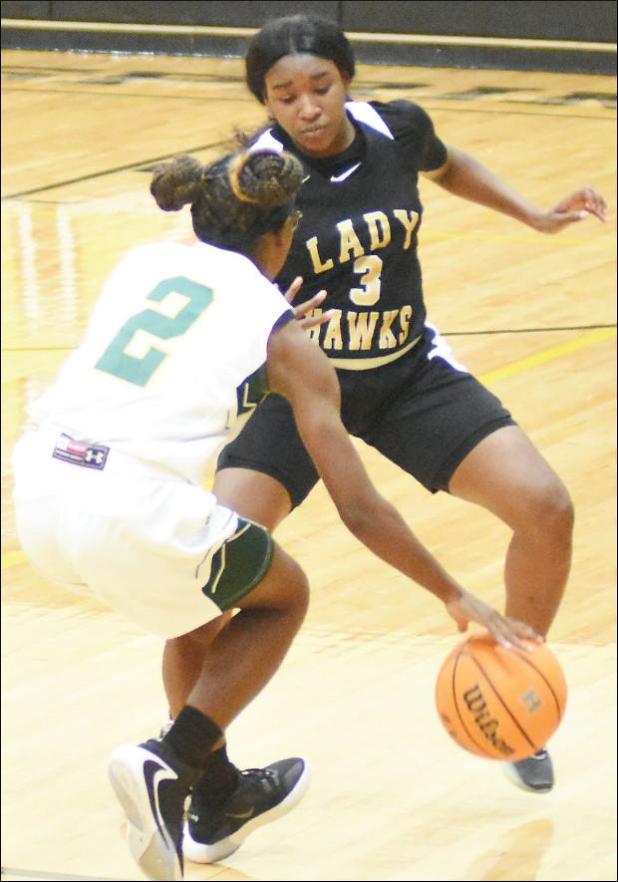 Ashanta Aldridge (3) of the Lady Hawks applies some pressure to Jakorien Hubbard of the Lady Lions.

It was far from easy for both Holly Springs teams as they turned back Marshall County rival H.W. Byers Tuesday night, Nov. 12, at home.

The Lady Hawks came back from a two-point halftime deficit to win 53-37, while the Hawks trailed the Lions by as many as nine before pulling out a 59-57 victory.

Dallas Fitzpatrick’s three just before the buzzer to end the first half gave Byers a 17-15 advantage.

“We got off to a very slow start, and I commend Byers on their effort and hustle,” said coach Andre Jones, who saw his Lady Hawks improve to 3-0 on the young season. “They (the Lady Lions) took advantage of their opportunities in the first half.

“At halftime, I advised the girls to give a better defensive effort and maximize on the turnovers we force.

“It was a win that came with a lesson, so we will take that and learn from it.”

Ashanta Aldridge drained back-to-back threes for Holly High in the third as the home team rallied to lead 35-27 with 1:51 to go.

Julia Vaughn and Dajah Turner played big roles in the second-half surge. They each had big buckets in the fourth as the lead stretched to double digits.

Vaughn was the top Holly High scorer with 16 points. Turner added 14 and Aldridge

“Dajah (Turner) stepped up and made a lot of things happen after Arriyunna Washington went out with an injury in the second quarter,” Jones said.

A fired-up bunch of Lions stunned the Hawks early. They led 11-5 just three minutes into the game on Cedric Watson’s drive to the hoop.

Holly High’s Tyhem Reaves had a steal and a bucket with 2:08 to go in the opening quarter to put the home team in front 15-12.

Then at the end of the first, Byers was up 16-15. Devin Moore had 10 first-quarter points for the Lions.

Byers went up 27-18 midway through the second period and clung to a 36-33 advantage at the half.

Bell was the man down the stretch for the Hawks. He scored seven of the Hawks’ last eight points as they won by two.

It was Kenzaki Jones’ first win as the Hawks’ new coach. James Sales, former head coach at Byhalia, is in his first season as head coach of the Lions.

“We played a well-disciplined and well-coached team in H.W. Byers,” Jones said. “We have to become more disciplined and look to the success of the team and not worry about our individual play.

“We struggled from the free-throw line and behind the arc again, yet found some interior play that we can build off of. I’m proud of the effort of our players and believe that in due time we will get better.”

Holly High played without the services of Dandy Dozen player Derek Fountain, who was injured.

Bell finished with 20 points, while Ded’Drick Faulkner scored 12, Reaves 11 and Dylan King 10. King led the way in rebounds with 10 and Reaves had eight.

Top scorers for the Lions were Rhyan with 20 and Moore with 14.

The Lady Hawks (3-0) and the Hawks (1-1) hosted Center Hill Tuesday of this week. They host Southaven Friday. Next Monday, Nov. 25, the Lady Hawks play at Collierville, Tenn., and next Tuesday, Nov. 26, both teams play in the Byhalia Thanksgiving Tournament.

The LadyLions (0-4) and Lions (1-3) hosted Lewisburg Tuesday of this week. They will travel to Independence this Friday night.