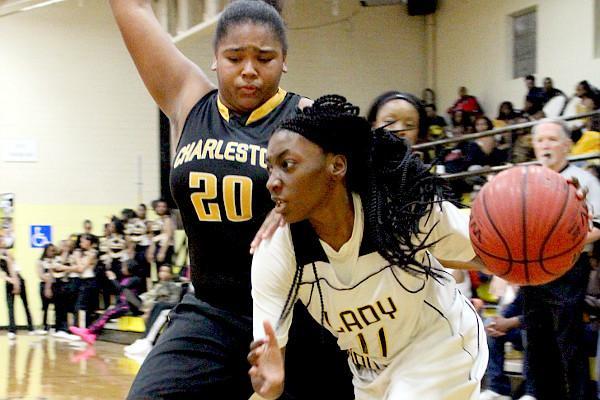 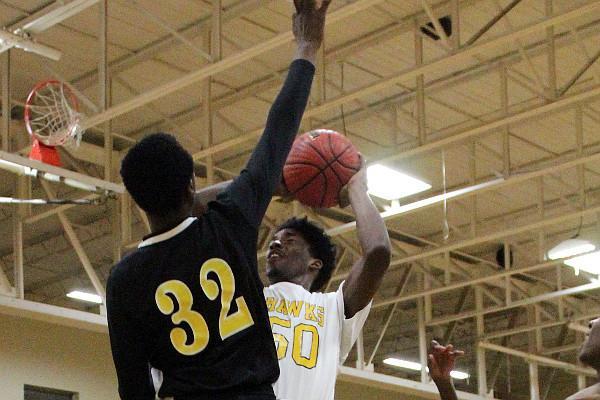 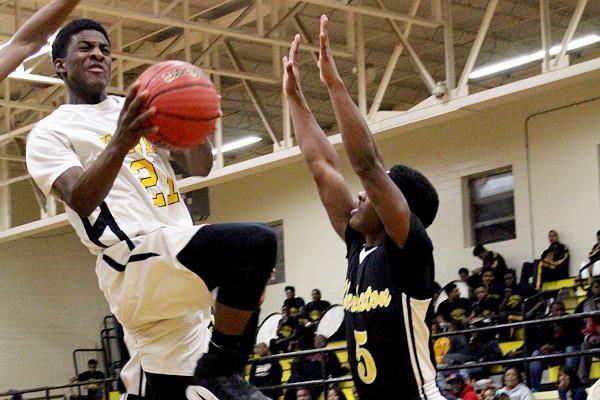 Anthony Johnson (21) soars to the goal. 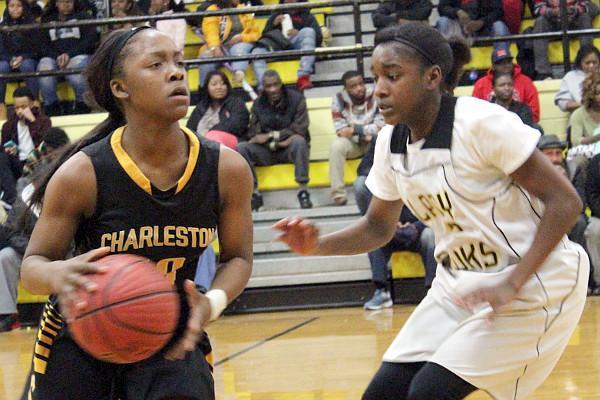 Ashanta Aldridge (right) of Holly High moves in on defense.

The Holly High basketball teams picked up a pair of District 2-3A victories over Charleston Friday.

On their home court, coach Andre Jones’ Lady Hawks held the lead in the first half. At the end of the third, they were trailing the Lady Tigers by five. Then, in the fourth, the Lady Hawks’ scoring kicked into high gear down the stretch and past Charleston 49-42.

Shretta Jeffries fired in a three-pointer to help give the Lady Hawks a 5-3 lead early in the first quarter. But Monique Zollicoffer’s two knotted the game at 5.

Camee Faulkner nailed a free-throw to cut the tie for the Lady Hawks. Later, Faulkner and Ashanta Aldridge each hit a three to put the Lady Hawks on top, 16-8, as the first had ended.

Things swiftly went into a different direction for Holly High girls (scoring-wise) in the third period. A two-pointer from Jasmine Suggs helped the Lady Tigers  snatch the lead by one, 25-24, at the 4:45 mark. The Lady Tigers continued to pour in more shots. They had gained 15 more points to Holly High’s four. The third ended with Charleston’s girls leading 31-26.

The Lady Hawks began to battle back against Charleston in the fourth. The game was deadlocked at 38 with 3:49 remaining. Kaila King’s freebie broke the tie. The Lady Hawks had reclaimed the lead by one, 39-38. Minutes later, Faulkner’s basket put the Lady Hawks up 43-40. Faulkner fired in two more buckets after that. But it was Prishonna Burgess’ two-pointer that helped the Lady Hawks take a seven-point win over Charleston in this conference game.

Coach Sylvester Kilgore’s Hawks hit the century mark, winning 107-52 over the Charleston Tigers in the nightcap.

The game was tied several times in the first quarter. For its sixth time, the game was knotted at 12. Corey Bell’s two charity points sliced the tie and had put the Hawks up 14-12 with 1:09 remaining.  But Chancey Hankins’ freebies deadlock the game again. Kendrick Fountain answered with a two and a free-throw shot. Ladarius Stinson’s three helped the Hawks grab the first quarter lead, 20-14.

At the break, going into the locker room, the Hawks had outscored the Tigers 34-14 in the second quarter to further extend the lead, 54-28.

In the third, the Tigers fell further behind. They tried to cash in on some points to close the gap – but to no avail. The Hawks had added 25 more points compared to Charleston’s 11. The Holly High boys were still up at the end of the third, 79-39.

The Hawks refused to slow down in the fourth. They kept firing in more shots. The Hawks outscored the Tigers 28-13 in this frame.  The Holly High boys went on to celebrate a 55-point victory over Charleston in this district game.

Fountain was the top producer with 24 points for Holly High. DaQuan Smith had 23. Bell had 15, Stinson 14 and Juwoyn Lyles 12.

DeAntre Prince had 15 points for Charleston. Hankins had 10 points.