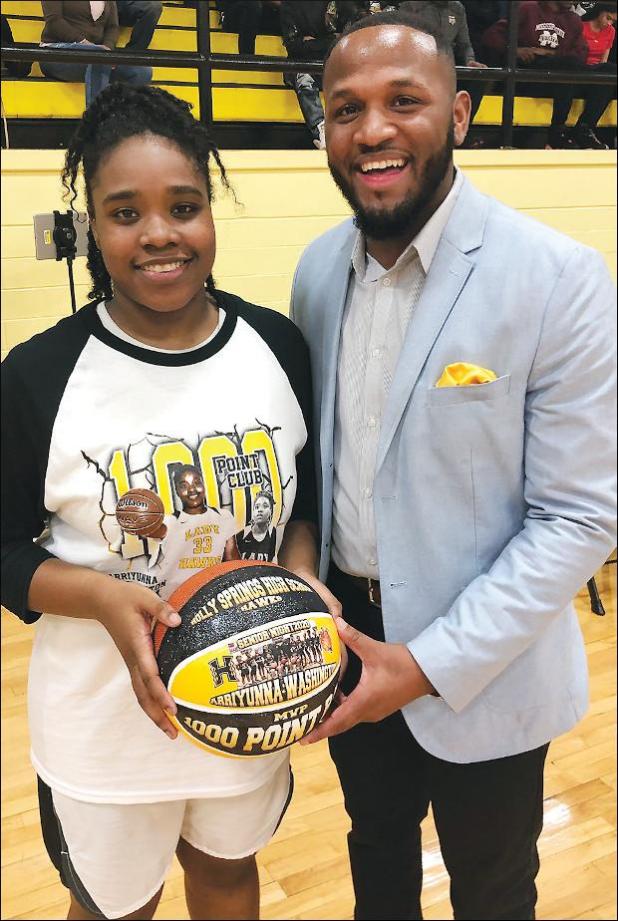 Photo by Barry Burleson
Joining the 1,000 point club
Holly Springs senior Arriyunna Washington was honored on Senior Night, February 4, for scoring more than 1,000 points in her high school career. Presenting Washington a commemorative basketball highlighting her achievement is head coach Andre Jones. The Lady Hawks, with Washington as one of the team leaders, enter this week's Region 2-3A Tournament with a 17-8 record. Washington again took center stage in the gymnasium on Monday of this week, as she signed a basketball scholarship with Mississippi Delta Community College.

The Holly Springs Hawks put up almost 100 points versus Water Valley as a tune-up for post-season play.

"We look forward to continuing our season and making a run for the state championship," he said. "We must continue to play as a team and stay locked in to accomplish our goals."

This is Jones' first season at the helm of the Hawks, who finished second in the state the past two seasons.

The Lady Hawks also put up a lot of points versus Water Valley Tuesday, Feb. 4, on Senior Night, winning 82-26.

"Wrapping up the regular season with a record of 17-8 compared to last season's 1316 record is what I refer to as a turnaround season," coach Andre Jones said. "These young ladies bought into the system and are carrying out my vision of what a winning culture looks like. This is a special group, and I feel we can make a strong post-season run."

The Holly High boys turned up the full-court heat early versus the Blue Devils and cashed takeaways into points. They led 28-9 after the first quarter.

Dylan King had a steal and a slam late in the second to ignite the home crowd. Tyhem Reeves closed the first half with a three from the corner. The Hawks were up 45-24.

The lead ballooned to 67-32 at the end of the third, and Marquavous Jones dunked with 1:58 left in the game to bring the fans to their feet once again. Holly High won by 57.

Reaves was the top gun with 24 points. Cori Bell followed with 17, and Derek Fountain scored 16. Jones had nine.

For the Lady Hawks, Julia Vaughn provided the early spark as they went up 24-4 and just kept on clicking on all cylinders.

Vaughn scored 12 of her 17 points in the opening quarter.

The Lady Hawks were up 45-12 at halftime and outscored the Lady Blue Devils 28-10 in the third.

Ashanta Aldridge also tossed in 17 points for the home squad. Dajah Turner contributed 16. Arriyunna Washington, who has broken the 1,000-point mark for her career, scored 10.

"Dajah Turner being added to the roster this year was the missing piece to the puzzle," Coach A. Jones said. "She's brought in a passion for the game and a hard-working mentality.

"The two seniors, Ashanta Aldridge and Arriyunna Washington, also have played a tremendous role in our success."

The Holly High girls will enter the Region 2-3A Tournament this week at Independence as the third seed.

"The goal is to be number one coming out of the district tournament and then prepare for rounds one and two at home," he said.

The top four teams move on to the first round of the playoffs, the top two playing at home.