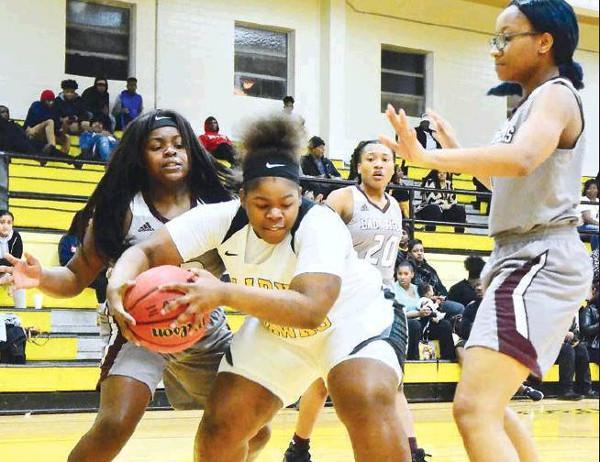 Photo by DeMill Dixon
Kaila King of the Lady Hawks is surrounded by Coahoma players during a home game last week.

Each game was decided by less than five points when Coahoma AHS visited Holly Springs December 11, the boys winning and the girls falling short.

Coach Sylvester Kilgore’s Hawks pulled out a 75-71 win over the Coahoma AHS Tigers, who he called “one of the best teams in 3A.”

“It was a top-notch, competitive district game, and it was a good win for our team,” Kilgore said.

Holly High won every quarter but the second and improved to 2-0 in the Region 2-3A play. The game was tied at 31 at halftime.

Two players had doubledoubles in the victory – Derek Fountain with 24 points and 13 rebounds and Cori Bell with 18 points and 11 rebounds.

Daveon Miller was the leading rebounder with 15. Tyhem Reaves scored 16 points and dished out four assists.

“We had great support off the bench from Cadarius Autry, who led us with hustle and defense,” Kilgore said.

“We got outhustled, especially on the offensive boards,” coach Andre Jones said. “We gave up 14 second-chance points, and that makes a difference.

“They got momentum toward the end, and we couldn’t bounce back.”

Arriyunna Washington, the leading scorer for the Lady Hawks, had another big night as she scored 20 of the team’s

The Lady Hawks turned things around Friday night at home, picking up their first Region 2-3A win of the season, 37-35 over North Panola.

“It was a much-needed district win for us,” Jones said. “I commend North Panola for their effort and hustle throughout the entire game. Both teams forced turnovers. We just happened to come out on top tonight. We functioned as a unit and we didn’t stop until it was over.”

Washington was the sparkplug. She had a double-double, 15 points and 11 rebounds. Cele’kiesha Brown added nine points and five rebounds.

The Hawks finished off the successful night on the home floor with a 63-45 victory over North Panola.

“It was a good district win for us,” Kilgore said. “Regardless of the score, we had to battle the whole game, and our main weapons were our defense and our rebounding.”

The win improved the Hawks to 3-0 in district play.

“Thanks to Hawk nation and the booster club for their support, and special thanks to the Chicken Coop and Domino’s Pizza for feeding our teams Friday night.”

The Holly High boys participated in the Ultimate South Showcase Saturday at Bartlett, Tenn., and pulled out a close one, 67-65, over Tipton Rosemark.

“We were down by as many as 15 in the second half, but we came together has a team and overcame a lot of adverse situations to rally and claim a victory,” Kilgore said.

The Hawks outscored the opposition 26-14 in the fourth quarter.

Fountain was honored as the most valuable player of the game.

He thanked Holly High supporters for their attendance on the road.

“We really needed it,” he said.

The Hawks (7-5 overall) will next face Minor, Ala., Friday at 3:30 p.m. in the Joe Horne Christmas Classic at Columbus.