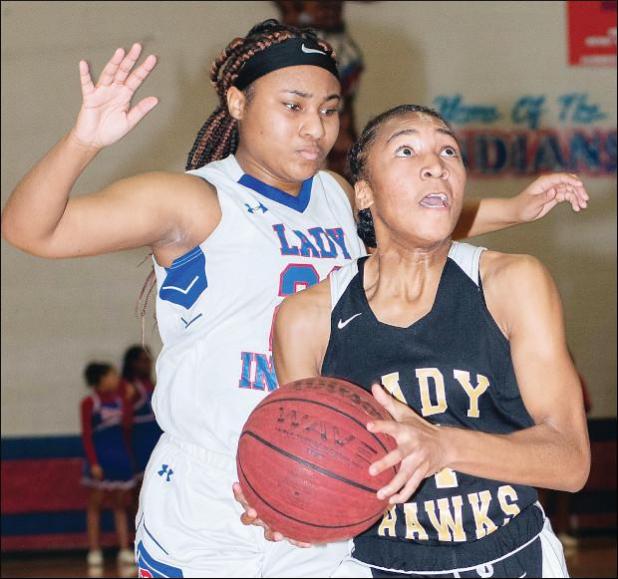 Photo by Dillon Day
Julia Vaughn looks to the goal with Ahlayiah Loveberry in pursuit.

Derek Fountain's 18point, 10-rebound performance led the Hawks to a 73-59 victory in Region 2-3A action.

"We had another hardfought game versus our county rivals," said Kenzaki Jones, head coach of the Hawks. "We were able to hold them off and continue our division win streak (7-0). As always, I'm proud of our guys and their efforts."

Others scoring in double digits for Holly High were Cori Bell with 15, Tyhem Reaves with 13 and Ded'drick Faulkner with 11.

The Hawks improved to 17-6 overall.

Vaughn led the way with 19. She also grabbed 12 rebounds and had five steals.

Turner scored 18 points, grabbed eight rebounds and dished out five assists. She was eight of 11 from the freethrow stripe.

Top point producers for Byhalia were Jasmine Malone with a game-high 26 and Darianna Wilson with 12.

The Lady Hawks improved to 15-6 overall and 5-2 in the district.