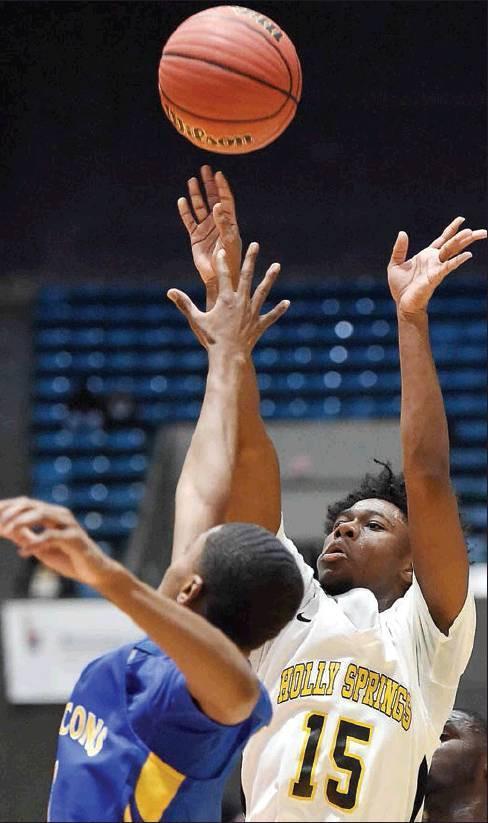 Photo by Chris Todd
Cori Bell (15) shoots over a Falcon in the title match-up Saturday.

Holly Springs got off to a rocky start at Mississippi Coliseum in Jackson Saturday afternoon and couldn’t recover.

The Hawks did not score the first five minutes of the Class 3A state championship game, trailed by 13 at the half and lost 59-44 to Velma Jackson. It was their fifth straight trip to Jackson and their second consecutive second-place finish.

“We had a lot of missed opportunities to start the game, and our opponent took advantage of it,” coach Sylvester Kilgore said.

“Give Velma Jackson a lot of credit. We did not play our game, and our opponent had a lot to do with that. They came out and played well.”

Cori Bell got the Hawks on the scoreboard with 3:00 left in the first. They were down 8-2 then and trailed 15-6 at the conclusion of the quarter.

The Falcons cashed in a Holly High turnover at the 6:27 mark of the second and surged ahead 21-7.

Kilgore’s squad climbed back to within nine, 25-16,

when Derek Fountain drained a three with 1:45 left in the first half. The Hawks were on the short end of a 29-16 score at the break.

Holly High fell behind by as many as 18 in the third. Then Tyhem Reaves drilled a three, and Dylan King got a steal and lay-up to quickly slice the hole to 38-25.

That’s as close as the Hawks would get the rest of the contest.

It is the Falcons’ (25-6) fifth state title in the last seven seasons.

“I thought we gave great effort,” Kilgore said about the Hawks’ rally efforts, “but give credit to Velma Jackson, they kept the foot on the gas.”

He said his team used up a lot of energy trying to come back, plus “I think we were emotionally and physically drained coming off a taxing semi-final game (Wednesday, when the Hawks rallied from behind in the fourth to defeat St. Andrew’s).”

He also pointed out that his opponent in the finals, Velma Jackson (from Madison County), basically played home games Wednesday and Saturday in the coliseum.

“We had been on the road all week,” Kilgore said, “not to mention, all my players were present for school at 7:15 a.m. Thursday for their make-up work and nine-weeks exams. Then we had to practice after school Thursday and left again Friday morning at 8 a.m. (for Jackson). It was a grind, but the boys made no excuses, and I commend them for their efforts.”

The Falcons out-rebounded the Hawks 47-33 and outscored them in the paint 32-20.

Kilgore said making it to two consecutive 3A championship games in “The Big House” is an outstanding accomplishment by his student athletes.

“It’s all they know – competing for a state championship,” he said.

“Ihate it for my seniors (Miller, Shontaveous Harris and Jaquavian Royston), but we have to just regroup. I put a lot of stock in these underclassmen, and winning the championship is our goal, and we won’t give up until we achieve it.”

The Hawks complete the season with a 23-10 record.

“Overall, these young men did well this season,” Kilgore said. “We battled through sickness and injuries, and adversity makes you a better person. We persevered.

“This loss stings right now for me and my young men but I commend my guys for sticking together and competing for the gold ball.”