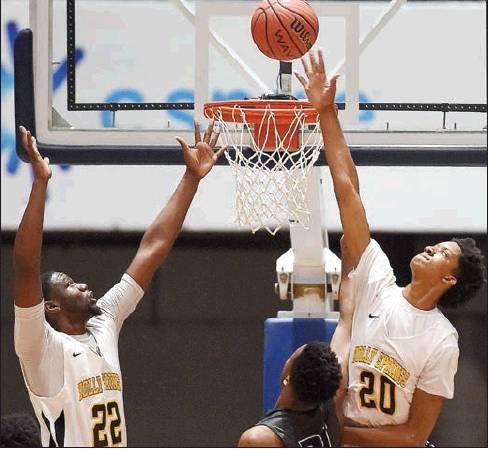 Photo by Chris Todd
Deveon Miller (22) and Derek Fountain (20) do work around the rim against the Saints.

Different players step up each time out for a balanced Holly Springs High School basketball team.

“It’s hard to key in on one person,” coach Sylvester Kilgore said.

In the Class 3A state semifinals Wednesday of last week, Derek Fountain, Cori Bell and Dylan King carried the torch. They combined for 54 points as the Hawks beat St. Andrew’s in a nail-biter, 67-64, at Mississippi Coliseum in Jackson. The win avenged a loss in the previous year’s state championship game.

Fountain scored 15 of his 23 in the second quarter as the Hawks snatched a 31-27 halftime lead.

“Those two gave us an exciting one-two punch,” Kilgore said.

King came off the bench and was a force in the second half. He scored 12 of his 14 in the last 16 minutes, including a huge play with 12 seconds left as Holly High rallied for the win.

“He filled a huge need for us based on the match-ups,” Kilgore said. “He was hanging around the basket and making free throws. He did his job. He’s the quarterback in football; he’s used to the leadership role.”

The Hawks trailed 8-0 out of the starting gate. Then Tyhem Reaves drilled back-to-back threes near the three-minute mark to cut the deficit to 10-6.

Fountain hit a pair of jump shots a couple of minutes into the second and the Hawks had their first lead, 18-16.

Holly Springs led by as many as five in the quarter and was up four at intermission.

In the third, the Hawks had their biggest lead, 40-33, on two free throws from King.

They held a 43-41 advantage going to the fourth.

The Saints’ star player, Rashad Bolden, sank a long three to start the final quarter. He finished with a game-high 32 points.

His two free throws with just 3:11 remaining put his team up 60-51. And the Saints’ fans, who had a short drive to “The Big House,” were raising the roof.

But Kilgore’s determined team did not fade away.

“We’re used to hostile environments,” he said, “and we’re used to coming down here (to Jackson). It makes a difference. It’s all they know. You can’t teach experience.”

Bell took over down the stretch, driving to the hoop, getting fouled and calmly sinking free throws. He hit eight straight to pull the Hawks within one, 64-63 with 35 seconds left.

Defense came up huge, too, for Holly High.

Fountain got a steal and found King, who scored and was fouled. He completed the three-point play to give the Hawks a 66-64 lead.

Then with eight seconds left, Bell tied up Bolden at midcourt, and the possession arrow favored Holly Springs.

Bell hit one of two free throws with five ticks to nail down the final three-point margin.

“I didn’t have that good of a first half,” Bell said, “but I knew I had to step up and be a leader down the stretch.

“I just stayed focused on the game and tuned out the noise.”

“That was huge,” Kilgore said.

“It was an exciting game against a great opponent.

“My players, they care about each other, and I tried to put them in the best position to be successful. They played like there was no tomorrow.”