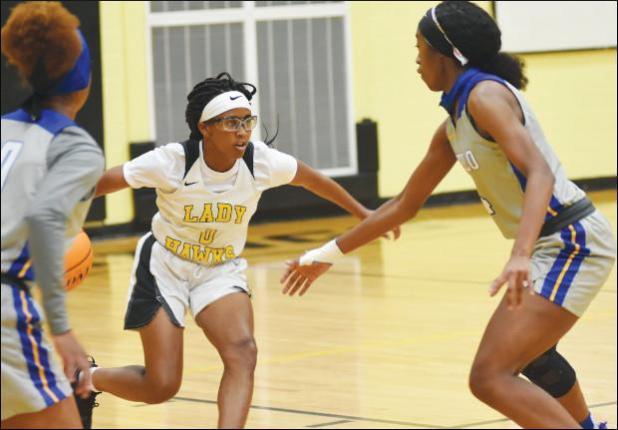 Holly Springs basketball teams welcomed the largest school in the state to town Friday night and dropped a pair of hard-fought games.

The 3A Hawks led by five going to the fourth before falling short, 55-48, versus the 6A Tupelo Golden Wave.

Holly High could muster just a couple of field goals and a free throw in the last eight minutes, while Tupelo scored 17 fourth-quarter points.

The Hawks were down 1812 after one quarter and 26-23 at halftime. Marquavous Jones led a third-quarter surge for the home team as he scored eight of his team-high 20 in that period. Dylan King was also in double digits with 13. “I can say we played 85 percent of the game decently,” coach Andre Jones said. “Tupelo gained some momentum in the fourth quarter and our timing was off defensively and offensively. It is definitely a learning point for the young men to understand the importance of closing a game out.

“We’re off to a slow start in the season. The players are still trying to figure each other out and develop togetherness. We had some experienced players to graduate last year so we are definitely working a lot harder to jell together and become a better team.”

The Holly High girls battled and battled versus Tupelo before falling 65-46.

The Lady Wave outscored the Lady Hawks 17-10 in the fourth.

Dajah Turner poured in a game-high 22 points for Holly Springs. She hit nine two-point field goals and was four of five from the free-throw line.

Holly High-Center Hill The 3A Hawks and Lady Hawks suffered double-digit losses at 5A Center Hill on Tuesday of last week. The Holly High boys dropped a 70-54 decision to the Mustangs. They trailed by just six, 3125 at halftime, but Center Hill turned the tide in the third, outscoring Holly High 20-6 in that quarter. Top scorers for the Hawks were Jones with 15, Ded’drick Faulkner with 14 and King with 11. The Lady Hawks lost 72-58 at Center Hill. They were down 42-16 at intermission. Leading scorers for Holly Springs were Celekiesha Brown with 23 and Turner with 16. The Lady Hawks (0-2) and Hawks (0-3) are scheduled to host 6A Hernando next Tuesday, Nov. 17.