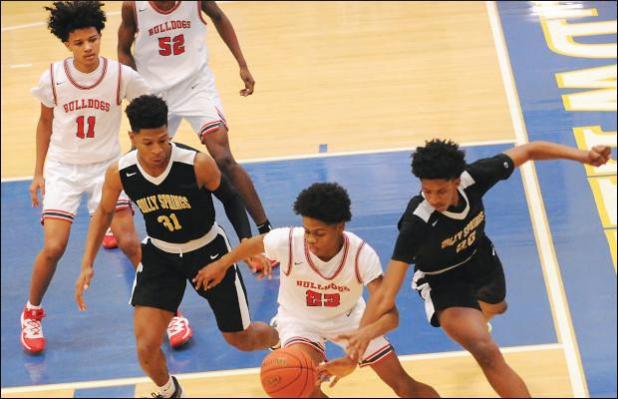 “It was a great experience for us to go out of town and play well against good competition from other states,” coach Kenzaki Jones said.

“Although we didn’t win both games, it was a good test for us.”

Derek Fountain’s 31 points led the Hawks to a 70-69 over Evansville Bosse (Ind.) on Friday of the two-day event.

Tyhem Reaves added 12 points and Marquavous Jones 10. It was a back-and-forth contest. Holly High trailed 19-13 after the opening quarter, led 40-35 at halftime and was behind 58-57 entering the fourth.

The Hawks outscored the Bulldogs 13-11 in the fourth and escaped with the onepoint win as Evansville Bosse missed a long, desperation shot just prior to the final horn.

Fountain of Holly High and Evansville Bosse’s Kiyron Powell, who scored 18, were named the MVPs for their respective teams.

The next day, December 28, Class 3A Holly High had the tall task of facing Pinson Valley, the defending Class 6A champion from Alabama.

The Hawks put up a valiant effort before falling 79-76.

Again, the game could have gone either way.

The Hawks went up 20-15 following the opening period but were down 46-40 at the halfway mark.

They cut the deficit to three entering the fourth.

It was a nail-biter for the final eight minutes with Holly High missing a three-point try at the buzzer that would have sent the game to overtime.

Fountain again led the Hawks with 23 points. Cori Bell was close behind with 22, and Jones scored 14.

Kam Woods had 31 for Pinson Valley.

Named MVPs for their respective teams were Bell for Holly High and Ga’Quincy McKinstry from Pinson Valley. McKinstry scored 19.

The Hawks’ season record, after the trip to Kentucky, went to 12-4.