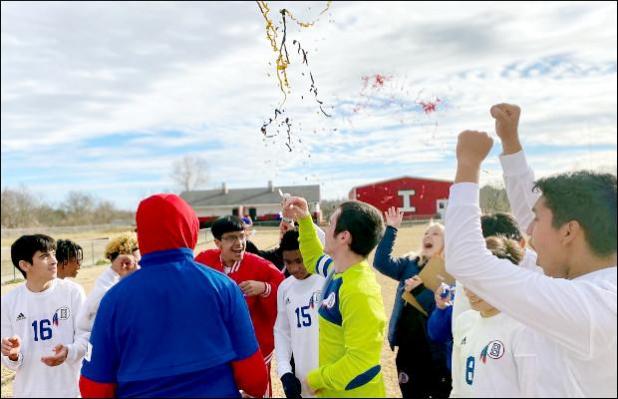 Courtesy photo
The Byhalia Indians celebrate a victory over Independence January 23 and a berth in the state soccer playoffs.

Both the boys and girls made the state playoffs for the first time in school history, and they had the winningest seasons since the soccer program was established in 2014.

“This is a very, very big turnaround year for the program,” said Alundis Pledge, is in his second season as head coach.

The Indians defeated Winona 3-0 Tuesday, Jan. 26, in the first round of the Mississippi High School Activities Association Class 1 playoffs. The Lady Indians also knocked off Winona. The game was tied at 1 at the end of regulation, and Byhalia won the shootout 5-4.

Both teams then fell in round two — the boys 5-0 to Amory last Friday and the girls 10-1 to Madison St. Joe on Saturday.

Coach Pledge said his Byhalia boys “have bought into the program.” “Last year we switched up formations, and it was different than what they were used to,” he said. “But this year was different. They executed.

“Plus, they worked hard and really tried to improve.” Seniors on the squad are Zeric Weaver, Deshawn Sharp, Jeremiah Seals and Orlando Sales.

Richard Patino, a freshman midfielder, is the team’s leading scorer.

The Indians finished 9-6 overall and 42 in district play.

Coach Pledge said the Byhalia girls’ season was a “very interesting” one.

All games, up until the second round playoff game, were won in overtime.

“We’re a young team, a lot of junior high players going against varsity teams,” he said.

“We’re starting fresh and building the program. We’ve been trying to come together and have fun. It’s paying off.”

The Lady Indians finished 5-6 overall and 3-3 in district play.

“It has been a great and historic year for Byhalia soccer,” Pledge said. “Next year we will be back.”