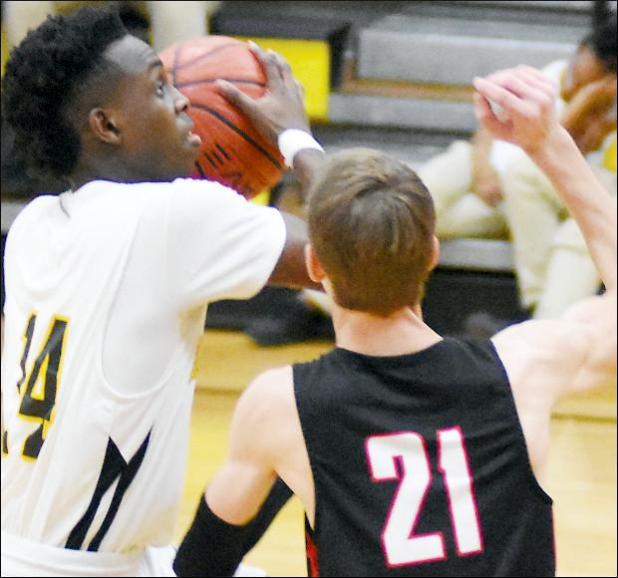 Photo by Barry Burleson
Ded’drick Faulkner (14) looks to shoot from inside the lane.

It was a successful start for the Holly Springs Hawks versus Region 2-3A competition.

Coach Kenzaki Jones’ team turned back Independence and Senatobia last week at home, and then added a non-district win over Booneville.

The Hawks started pulling away from Independence in the second quarter Tuesday, Dec. 3, and rolled to a 71-54 victory.

“I’m proud of the way we played,” Jones said. “Our division is strong so it was great to start division play with a win. We must play each team in the division twice, so we must protect our home court to make sure we keep the edge on our opponents.”

Holly High, which struggled some out of the starting gate, built a 47-32 lead at halftime.

The Hawks out-rebounded the Wildcats 44 to

The Indians had little trouble with Senatobia Friday night on the home floor. They surged to an 80-55 victory.

King also had a huge night on the boards with 14 rebounds. Fountain grabbed eight.

The Hawks out-rebounded the Warriors 40-23.

The Hawks turned in likely their best performance of the season Saturday in the Doc Vandiver Classic at Baldwyn as they scorched Booneville 70-49.

“We had an outstanding game,” coach Kenzaki Jones said. “We were able to dominate the game from start to finish and play as a team.

“We are starting to click on all cylinders and we hope to keep it going throughout the rest of the season.”

Nine Hawks scored in the 21-point win over the Blue Devils. Reaves led the way with 20, Bell followed with 13. Fountain scored nine.

Holly High outscored Booneville 21-10 in the second quarter to go up 32-20 at halftime. The Hawks then left no doubt in the third, putting up 20 points to the opposition’s nine.

The Holly High girls had a barnburner versus Independence. They dropped a 66-60 decision in overtime.

Missed free throws proved costly for the Lady Hawks. They were 19 of 48 from the line (39.6 percent).

“We played well; we worked hard defensively and created many scoring opportunities,” coach Andre Jones said. “We did not do a good job from the free-throw line, and that was the determining factor. There was great effort and execution of the game plan by the girls, but we did not finish.”

Leading the Lady Hawks in scoring were Dajah Turner with 15, Julia Vaughn with 13 and Ashanta Aldridge and Arriyunna Washington with 11 each.

Celekeisha Brown was the top rebounder with seven.

The Lady Hawks couldn’t get the offense in gear Friday night versus Senatobia and lost 49-37.

Turner and Vaughn had six rebounds each for the Lady Hawks, who out-rebounded the Lady Warriors 36-24 in the loss.

The Holly High girls dropped a low-scoring 38-30 decision to Booneville Saturday in the Doc Vandiver Classic at Baldwyn.

Brown was the top scorer for Holly High with nine points. Vaughn had a big night on the boards with 13 rebounds.

The Lady Hawks again struggled from the free-throw stripe, going seven of 21 (33.3 percent).

The Hawks (7-3) and the Lady Hawks (5-5) will travel to North Panola Friday for district contests. Next Tuesday, Dec. 17, they visit Marshall County rival Potts Camp, a non-district foe.