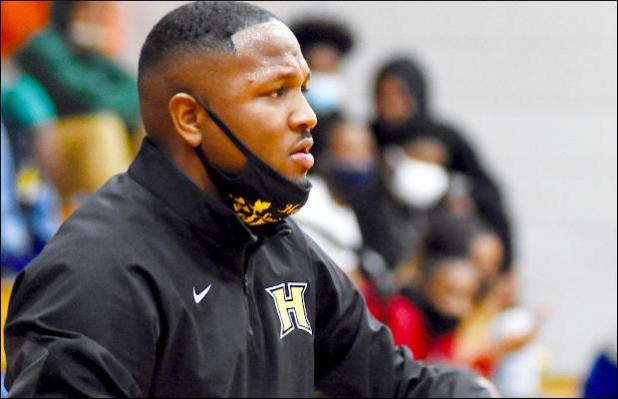 Photo by Barry Burleson
Andre Jones, coach of the Holly Springs Hawks, is pictured giving instructions to his team from the sideline in a game earlier this season.

The Holly Springs Hawks closed 2020 with a bang.

“I am always proud of my guys, especially when we go out and put forth a great effort and show togetherness,” Jones said. “That’s exactly what we did. I feel that we played poised and stayed focused all 32 minutes. And we handled adversity during the game in a decent manner.”

The Hawks got off to a good start. Dylan King scored six first-quarter points as they took a 17-11 lead.

The Mustangs rallied in the second period. Zandon Haralson scored 13 of his game-high 18 in the quarter, including three threes. The visiting squad was up 33-31 at the half.

In the third, Ded’drick Faulkner and Marquavous Jones each hit a pair of buckets for Holly High, which went back in front, 45-43.

A low-scoring fourth went the way of the Hawks. All six of their points in the last eight minutes came from the freethrow stripe — with Charvez Ambrose hitting four. Meanwhile, Holly High held Center Hill to just four points in the fourth and won by four.

Top scorers for the Hawks were Faulkner with 15, King with 13 and Jones with 12.

Coach Jones complimented his point guard Faulkner, for his offense and defense.

“He does a great job at playing both sides of the ball,” Jones said. “He has a huge role, but he is consistent.”

He said knocking off the Mustangs was a good boost before the holiday break.

“Center Hill is a great team, and we knew what to expect going into the game,” Jones said. “I applaud our guys for their determination and fight.”

The Hawks also avenged a 70-54 loss to the Mustangs earlier in the season.

The Hawks (3-7) and the Lady Hawks (0-4) are scheduled to travel to Ashland on Tuesday, Jan. 5. They will host Freedom Prep Academy Friday, Jan. 8, and then return to District 2-3A play Tuesday, Jan. 12, at home versus Water Valley.