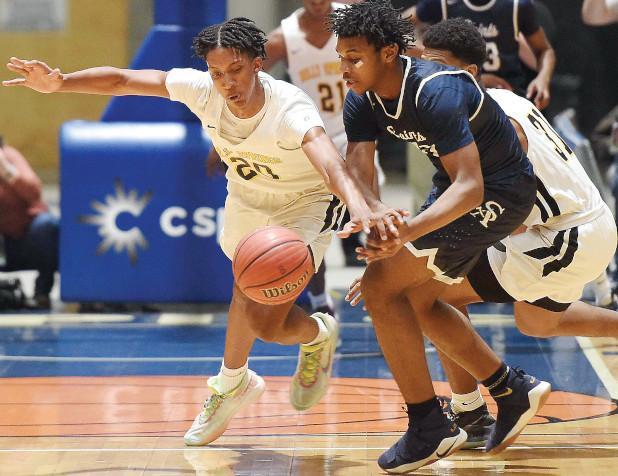 Hawks go out in state semis

The first quarter came back to haunt Holly Springs on Wednesday of last week in the Class 3A state semi-finals.

The Hawks, who fell behind by 14 early, managed to get within five in the fourth but couldn't complete the rally try. They lost 64-54 to St. Andrew's at Mississippi Coliseum in Jackson.

"They made big shots, and we missed a lot of easy ones," coach Kenzaki Jones said about digging the hole. "Then we started trading buckets with them, but you can't do that when you're playing from behind."

The Hawks actually outscored the Saints in every other quarter, by two in the second and by one in both the third and fourth.

They still trailed by 11 entering the final quarter, but didn't quit. They got to within five, 57-52, on Derek Fountain's jump shot with 4:35 left, and had their chances to get closer. Instead, St. Andrew's hit key free throws down the stretch and won by 10.

"We just couldn't get the ball to go in at times, whether it was free throws or lay-ups under the goal," Jones said.

"But there was no quit in this team. I'm proud of them."

The Hawks got to within seven in the second quarter on Fountain's steal and slam. They trailed 36-24 at the half.

In the third, they pulled to within eight on Dylan King's bucket. They were down 53-42 after three periods.

Cori Bell got the frantic rally attempt in the fourth started with a successful drive to the goal. Ded'drick Faulkner's three cut it to eight. Fountain nailed a couple of free throws to slice it to six, and then Bell dove to the court on a hustle play to gain possession of the basketball. A minute later the deficit was five, which was as close as the Hawks would get.

For the Saints, Rashad Bolden blistered the nets for a game-high 36 points. He had 21 of those at halftime.

"He's tough," Jones said. "He makes a lot of stuff happen for them."

"We just couldn't stop the bleeding," Jones said. "Hats off to St. Andrew's."

"We had our sight set on two more wins, but we have to live with it," Jones said. "Again, I am proud of this group's effort. They played hard all year."

Holly High finishes with a 25-8 record. Jones took over as head coach one week before the regular season started.

"It's been a tremendous five months," he said.

"We will certainly miss them," Jones said. "That's a big nucleus of our team. But at the same time, it will be an opportunity for the younger guys to step up and help us to reload."

The St. Andrew's Saints went on to defeat Velma Jackson 61-40 for the Class 3A state title Saturday afternoon at Ole Miss.