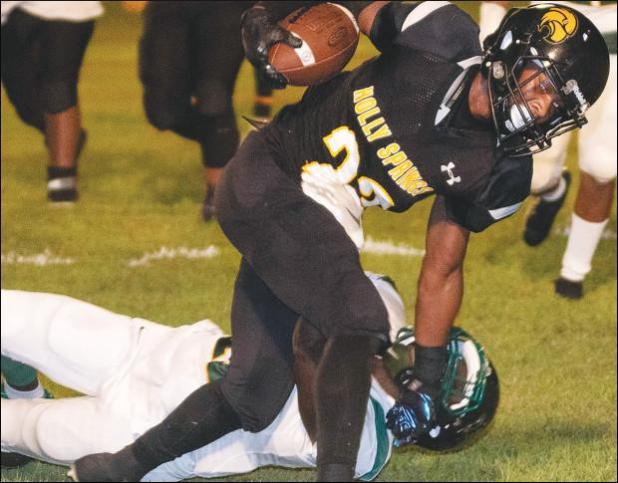 Photos by Dillon Day
Antonio Evans (23) of Holly Springs battles for more yards as a Rosa Fort player tries to pull him down. 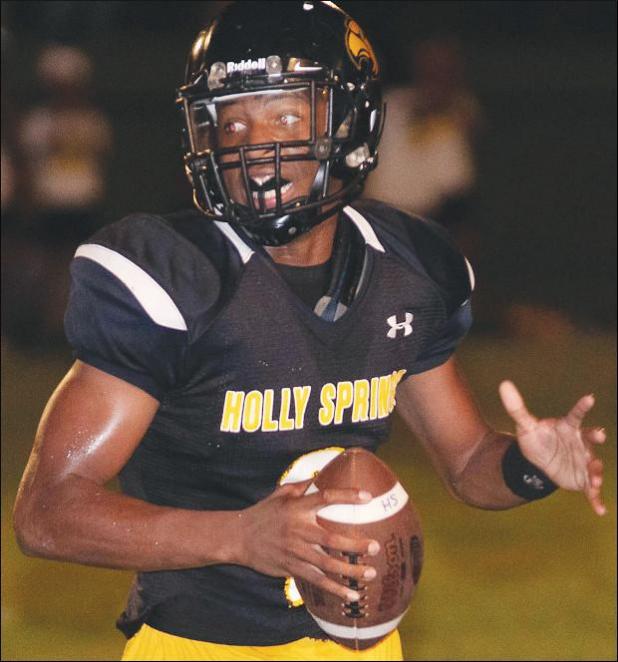 Quarterback Dylan King (2) of Holly High rolls out and looks for a receiver Friday night versus Rosa Fort.

Holly Springs let a close game slip away in the second half Friday night at home.

The Hawks went up by one in the second quarter, trailed by seven at the half and went on to lose 39-7 to Rosa Fort. Their early-season record went to 1-3.

“We came out and did some things well in the first half,” coach Sylvester Hemphill said. “We played power football offensively with an aggressive running style, and defensively we were pretty sound. We didn’t let them get on the edge with their running game.”

Rosa Fort went up 14-7 with 48 seconds left in the second period.

The Lions then pulled away in the second half, getting one touchdown in the third and three in the fourth.

“In the second half, we didn’t execute as well, and it cost us,” Hemphill said.

“Give Rosa Fort credit, too. They made some adjustments at halftime and capitalized on some big plays.”

Roy Vaughn turned in a strong performance defensively for Holly High. He had seven solo tackles, six assists, one tackle for loss and a sack. Latorrence Davis also had a big night with three solo tackles and eight assists.

Hemphill, in his first season at the helm of the Hawks, said he is seeing progress in his team from week to week.

“We just have to put it all together,” he said. “Every player has do his job on every play.

“We are not down. Our kids’ spirits are up. It’s still early in the season.”

This Friday night, the Hawks will host Coahoma County. The game was originally on the schedule as an away contest but changed.

“We will be geared up for this one, and we are looking forward to it,” Hemphill said. “We will have our guys ready to go.”

The Red Panthers (1-3) are coming off a 40-8 loss last Friday night to rival Coahoma AHS.

It will be Holly High’s final non-district contest. An open date follows on September 27 before Independence comes to Sam Coopwood Park October 4 to start Region 2-3A action. Plus, that Independence contest will be homecoming for the Hawks.

“That’s when the season gets real,” Hemphill said. “We have to clean all our mistakes up – keep working hard and improving as a team.”