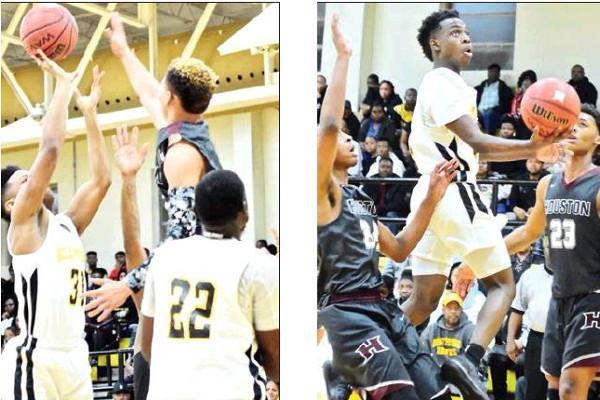 The big-game experience came in handy for the Holly Springs basketball team at home Thursday night.

After letting an 11-point, second-quarter lead slip away and trailing by six entering the fourth, the Hawks snatched a 66-60 victory over Houston in the Class 3A state quarter-finals.

“It was an exciting win for our team,” said coach Sylvester Kilgore, who will take his team to Jackson for the fifth straight season. “We had players step up in key moments in the fourth quarter. Our kids stuck together in some adverse situations, to say the least, and used our championship spirit to get the win.”

“Our big men did a good job in the paint on both ends,” Kilgore said. “Our guards excelled in transition.

And we had players make key free throws in crunch time.”

Holly High fell behind 4-0 in the first minute of the game. Its first lead, 13-12, came with 47 seconds left in the opening period on Cori Bell’s drive to the goal.

But the Houston Hilltoppers closed the half on an 8-0 run of its own to trim its intermission deficit to 30-27.

The third quarter was not a good one for the Hawks. They were outscored 20-11 and were behind 47-41 entering the last eight minutes.

Derek Fountain, who experienced early foul trouble in the game, hit a free throw and two straight jump shots to get the Hawks to within one, 47-46. Two minutes later, Bell cashed in a pair of free throws to put the home team up 51-50. Houston grabbed the lead back on Xavier Virges’ long three.

Two Bell free throws tied the game at 55 with 2:20 remaining. Fountain then got a steal, was fouled and hit two charity shots to give the Hawks a lead they never relinquished. Bell and Ded’drick Faulkner calmly drilled two free throws each in the final 15 seconds to nail down the win and set off a big celebration by Holly High fans, who cheered loudly all night long.

“Thanks to Hawk nation for showing up in masses and willing our Hawks to victory,” Kilgore said.

Bell finished with a gamehigh 32 points. He was 12 of 18 from the free-throw stripe. He also had eight steals.

Faulkner and Fountain scored 10 each.

For Houston, Virges had 22 points and Shemar Crawford

The Hawks (22-9) will face St. Andrew’s Episcopal Wednesday of this week in the 3A semi-finals at Mississippi Coliseum. The Saints defeated Holly High in last year’s state championship game.

With a win Wednesday, the Hawks will play Yazoo County or Velma Jackson in the state title game Saturday at 3 p.m.